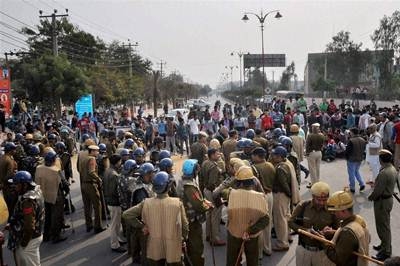 Jind (Haryana): The district administration in Jind, Haryana, has clamped prohibitory orders for two days with the Jat leaders threatening to hold ‘jail bharo’ movement beginning today demanding the release of those arrested during the quota stir.

District Magistrate Vinay Singh said they have imposed Section 144 of the CrPC for two days to prevent any untoward incident during the ‘jail bharo’ movement.

He also said that adequate security arrangements have been made with senior district officials appointed as duty magistrate.

Meanwhile, the Akhil Bhartiya Jat Aarakshan Sangharsh Samiti (ABJASS), the organisation which spearhead the quota stir in February, has extended its support to the ‘jail bharo’ movement being organised by the Jat Yuva Ekta Manch.

The Haryana Cabinet had in March approved the Jat Reservation Bill to provide reservation to Jats and four other castes in government jobs and educational institutions.

The Manohar Lal Khattar-led BJP government had then said that it would bring the bill to give reservation to the Jats and four other castes – Jat Sikhs, Bishnois, Tyagis and Rors – in the Budget Session, which came to an end on March 31.

The community has been demanding reservation in the existing backward classes (BC) category. The Backward Classes quota is bifurcated in two categories–BC-A and BC-B having 16 and 11 percent reservation respectively.