Seat-sharing talks between RJD and Cong stuck, CPI-ML issues list of 30 seats on its own 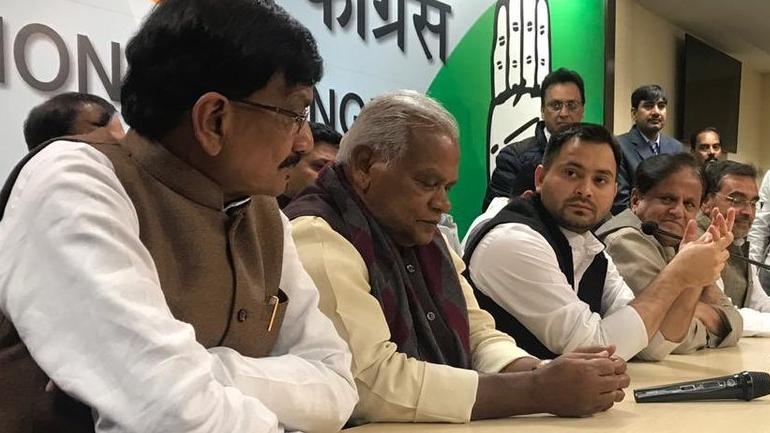 Patna: Even as the notfication for 71 seats going to polls in the first phase of Bihar Assembly elections was issued Thursday, the seat-sharing agreement in Grand Alliance seems to have been stuck with its main constituents RJD and Congress failing to reach an understanding on allotment of seats among partners.

Not only are the differences between the major partners RJD and the Congress getting wider but even an influential expected entrant to the opposition coalition - the CPI-ML - is peeved at Lalu Prasad's party not giving it "decent number" of seats in which it has influence".

The opposition alliance has over the past few weeks lost two of its allies -- Hindustani Awam Morcha of former chief minister Jitan Ram Manjhi and RLSP of former union minister Upendra Kushwaha.

Vikassheel Insaan Party remains with it and the coalition has pinned hopes on the Left parties -- CPI, CPI(M) and CPI-ML.

Sources in the RJD and the Congress said that the main impediment in the seat sharing is the lower number of seats Lalu Prasad's party, which is the major partner in the coalition, is offering to the grand old party.

The sources said that Congress has given a list of 75 seats to the RJD.

Two days ago the RJD made it clear that it will give the Congress 58 assembly seats and the Valmiki Nagar Lok Sabha seat which will witness by-poll on November 7.

This was confirmed by RJD spokesman Mrityunjay Tiwari, who spoke to PTI.

Sources in the Congress said that this number is not acceptable to it.

RJD national spokesman Manoj Jha told media persons here on Thursday that talks are on and "there is no chance of Congress going away from us."

"Gathbandhan of parties means there will be some differenes on seats and indentification of constituencies among others," Jha said outside 10 Circular Road residence of former chief minister Rabri Devi.

Asked if the talks are struck due to the "ariyal" (stubborn) approach of RJD, Jha, a Rajya Sabha member of the party, flatly denied it saying "RJD has never displayed such an attitude."

RJD MLA Bhola Yadav, known as an emissary of RJD supremo Lalu Prasad, said "things will be clear in a day or two ... Have patience."

Media reports suggest that Yadav, who was camping at Ranchi, has returned with Prasad's signature on the candidature of 150 RJD nominees for the 243-member Bihar assembly.

To add to this Communist Party of India (Marxist- Leninist), which has three MLAs in the Bihar house presently and enjoys support in central Bihar areas, is peeved at RJD's approach on seat-sharing.

The hardline left wing party after a long wait for an amicable seat-sharing arrangement in the anti-NDA camp lost its patience Wednesday and announced that it would contest 30 of the 71 seats which will go to polls in the first phase on October 28.

CPI-ML state secretary Kunal said in a statement that several rounds of talks were held with RJD but no amicable solution was reached.

He said that CPI(ML) had even agreed to pare down its demand to 20 seats but the RJD refused to offer seats where the party holds sway such as Aurangabad, Buxar, Gaya and Nalanda.

"Under the circumstances CPI(ML) decided to issue its first list of 30 seats which it would contest on October 28," the statement signed by the party's office secretary Kumar Parvez said.

New Delhi: Top BJP leaders, including Home Minister Amit Shah and party president J P Nadda, held a meeting with Lok Janshakti Party chief Chirag Paswan on Thursday to thrash out a seat-sharing arrangement with allies for Bihar assembly polls. Paswan listed his grievances with Bihar CM Nitish Kumar and spoke of pressure from within his party to contest on 143 seats in the elections to the 243-seat assembly at the meeting here.