Search on for the mythical Saraswati river! 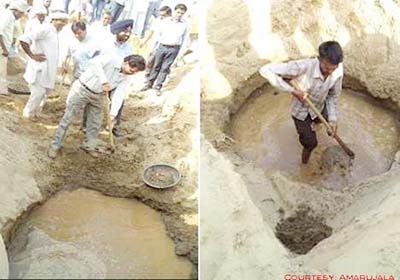 The Rajasthan government has constituted the Rajasthan River Basin and Water Resources Planning Authority to revive the Saraswati river in the state besides looking into various issues connected with river basins including intra-basin river water transfer.

According to its Chairman Sriram Vedire, the authority would coordinate with top institutions like ISRO, Central Ground Water Board, State Ground Water Board and National Institute of Hydrology and an agency working in the area of arid zone paleo-channels to analyse the facts for the purpose before preparing a detailed report in three to six months. The Haryana government has also initiated digging work in April to find the Saraswati. It has now named the Haryana Saraswati Heritage Development Board to do field work in this regard. The board will maintain liaison with institutions like UNESCO and Archaeological Survey of India (ASI). Mentioned in the Rig Veda and other ancient literature, the river is believed to have once flowed, parallel to the Indus, through what is now desert before falling into the Arabian Sea. It is believed to have disappeared between 5000 BC and 3000 BC due to tectonic events in the Himalayas.       French-born Indologist Michel Danino, who has authored “The Lost River: On the Trail of the Sarasvati” (2010), says partial revival of the upper course of the Saraswati (including the Markanda, Dangri, Ghaggar and other streams in this river system) is possible only through massive reforestation of the Shivalik Hills’ slopes and water harvesting in the plains.