Praveen Togadia's Antarrashtriya Hindu Parishad (AHP) is making headlines as the Kerala branch of the organisation took to vandalising the church set built for a Malayalam film Minnal Murali.

The incident took place on Monday, May 25, 2020. The set was built to shoot the climax of the superhero Malayalam movie on an island on the Periyar River in Kalady, but shooting was stopped due to the coronavirus lockdown.

The General Secretary of the AHP, Kerala, mentioned in a Facebook post, that the set was demolished as it was built near the Adi Shankaracharya Mutt. Hari Palode, the General Secretary wrote in the post that although they told the filmmakers not to build their set near the mutt, it was done anyway, and hence, the members demolished the set as it was a matter of self-respect.

Kerala CM Pinnarayi Vijayan condemned the incident by saying such an incident should have never happened in their state, and that such actions were unacceptable by the people of this country. In a Facebook post, Shashi Tharoor wrote "Vandals with no respect for private property, let alone religion should be prosecuted and fined."

Actor Tovino Thomas, who plays a local superhero in the film, wrote, “The reasons they cite for this unceremonious act are not understood to our senses till now. We’ve heard of movie sets being vandalised by religious fanatics in northern parts of India. Now it’s happening to us right here.

“These are anti-social elements who are uncomfortable seeing a church in front of a temple. Their act is not against the film ‘Minnal Murali’ or its crew. Their act is against Kerala,” actor Maala Parvathy wrote on Facebook.

Director Aashiq Abu wrote, “Sangh terrorists who are provoked even by film sets must be stopped at any cost. The Malayalam film industry will collectively fight against such extreme activities. Solidarity with the team of ‘Minnal Murali’.”

The Periyar river is a a sacred religious symbol for Hindus, Muslims and Christians. While the Aluva Sivaratri festival is conducted on the banks of this river, it is also famous for being the birthplace of the Shankaracharya, a Hindu philosopher, responsible for consolidating the Advaita Vedanta.

For the Christians, the St. Thomas Church is on the Kurisumudi hill, not too far from the Periyar River. And lastly, India's oldest mosque, Cheraman Juma Masjid, is located in Kodungalur, a town close to this river.

To the members of the AHP, the Periyar River is a unrecognisable symbol of religious tolerance and communal harmony. It comes as an irony that the religious extremists vandalised a fake church on the banks of a river known to have a deep sense of religious diversity and deep-rooted spirituality.

Founded in 2018, the AHP is a rival organisation of the Vishwa Hindu Parishad (VHP). Togadia founded this organisation after he was replaced as the chief of the VHP. Having been associated with the Rashtriya Swayamsevak Sangh (RSS) since his childhood, Togadia has been a strong critic of PM Narendra Modi, although the two worked together and supported each other in Gujurat while Modi was the CM. In 2019 however, Togadia has said in the past that PM Modi cheated Hindus by not constructing the Ram temple in Ayodhya and that a law should be passed to further this at the earliest.

Read Also
Not Ram Temple, farmers’ interest is the real temple and we will fight for it: Togadia 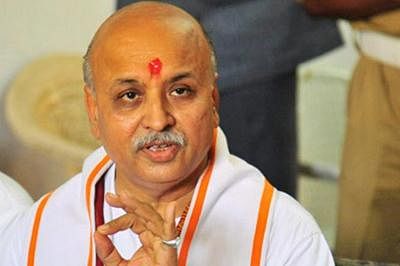 In January 2020, he said that it was good that the government was constructing the Ram Temple in Ayodhya but expressed displeasure as he believed the government has failed at good governance as farmers were still in debt, unemployment was increasing and women's safety was a issue. He as been a constant voice of criticism of the government as he believes Rama Rajya it yet to be achieved. Lastly, he expressed his disappointment over the selection of committee members for the Ram Mandir trust as according to Togadia, they were just Modi loyalists and not members who actually participated and were involved in the Ram Janmabhoomi movement.