RSS active in 90% of blocks in India: Manmohan Vaidya 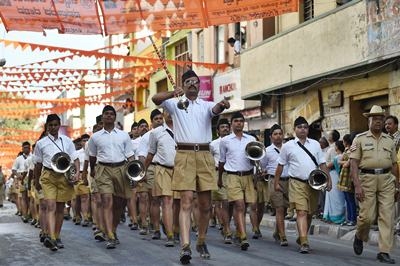 Bhubaneshwar: The RSS has seen a sharp rise both in number of shakhas and in popularity among the youth, ever since the Narendra Modi swept to power in 2014. In fact, RSS' Saha Karyavaha Manmohan Vaidya claims that the Rashtriya Swayamsevak Sangh is active in 90 per cent of the blocks across the nation. Speaking at Bhubaneshwar, on the sidelines of Akhil Bhartiya Karyakari Manda, Vaidya gave out statistic to back his claim.

At present there are 57,411 daily shakhas and 18,923 weekly meetings held across the length and breadth of the country, a rise of more than 50 per cent since 2010. In the year 2009, a plan was made to expand the Sangh's footprint, said Vaidya, adding that due to this, shakhas have been continuously expanding since 2010.

Vaidya said RSS is active in 90 per cent of the blocks. Students and youth are running 60 per cent of all shakhas of RSS. This partially explains the rise of vote-share for BJP among the first-time voters.

The number of shakhas run by individuals above the age of 40 years is just 11 per cent.

Vaidya also said Ram temple is not a political issue for the Sangh. He called it a matter of "desh ki astha" (matter of faith for the country), while speaking at Bhubaneshwar. Interestingly, his comment comes on a day when Chief Justice Ranjan Gogoi said: "Enough is enough," while hearing the title dispute of Ayodhya and at the end of the day's hearing the Supreme Court reserved judgement in Ayodhya title dispute at the close of the arguments.

The Sangh heavy-weight once again backed the Modi government on the abrogation of Article 370, citing its "temporary" nature in the Constitution. The Indian government had abrogated the contentious Article that gave special powers to Kashmir, on August 5 this year.

He also took a dig at the Mamata Banerjee administration while calling murders of people belonging to the "nationalist fray" as "unfortunate".