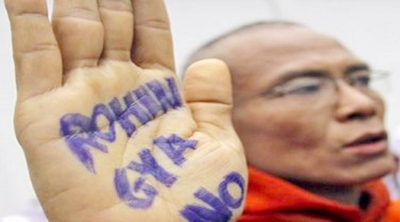 New Delhi : Concerned over more than one lakh Rohingya Muslims settling in India, the Centre has convened a meeting of top officials of seven states, including UP and Jammu and Kashmir, on July 20 to discuss monitoring their activities given their vulnerability to radicalisation.

The meeting, to be attended by Principal Secretaries (Home) of the states, will also take note of the “alarming” development of Rohingya Muslims marrying Indian girls, especially in Jammu and Kashmir, a government official told PTI here on Monday.

According to an initial estimate, there are around 1.3 lakh Rohingyas, mostly settled in Uttar Pradesh, West Bengal, Andhra Pradesh (mainly Hyderabad), Kerala, Assam, Jammu and Kashmir and Delhi.

“Rohingya Muslims are ‘persecuted’ in their homeland in Myanmar. Hence, there is a fear that the members of the community could be vulnerable to radicalisation. We have to be cautious before things go out of hand,” the official said.

Rohingya Muslims have been infiltrating into India through the porous Indo-Bangladesh border and most of them have secured identity cards given to refugees and asylum seekers by UN Refugee agency UNHCR, making it difficult for authorities to deport them immediately even if caught.

The Home Ministry had been informed by security agencies last year about the interception of a group of Rohingyas at the Indo-Bangladesh border in Tripura, among whom there was a Kashmiri man.

“That Kashmiri man told officials that Rohingya Muslims are increasingly settling in Jammu and Kashmir and even marrying Kashmiri girls, which is an alarming development,” the official said.