RIC should ensure humanitarian assistance to Afghans without any hindrance and politicization: EAM S Jaishankar 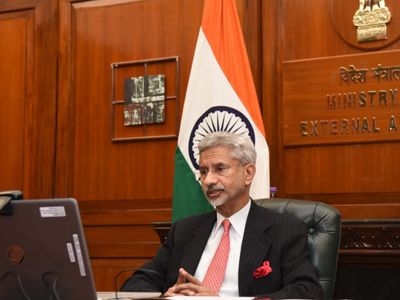 Russia, India and China (RIC) need to work together to ensure that humanitarian assistance reaches the Afghan people without any hindrance and politicisation, External Affairs Minister S Jaishankar said on Friday.

In a virtual address at a foreign ministerial meeting of the trilateral, he said it is necessary for the RIC countries to coordinate their respective approaches on the threats of terrorism, radicalisation and drug trafficking.

Chinese Foreign Minister Wang Yi and his Russian counterpart Sergey Lavrov were present at the meeting.

As a contiguous neighbour and long-standing partner of Afghanistan, India is concerned about the recent developments in that country, especially the suffering of the Afghan people, Jaishankar said.

Chairing the meeting, he said India supports an inclusive and representative government in Afghanistan as also other provisions of UN Security Council Resolution 2593.

"In line with our commitment to the well-being of Afghan people, we have offered supply of 50,000 MT of wheat to Afghanistan to address the drought situation," he said.

"The RIC countries need to work together to ensure that humanitarian assistance reaches the Afghan people without hindrance and without politicisation," he added.

In his remarks, Jaishankar reaffirmed India's continued commitment to foster closer dialogue and cooperation among the three largest nations in the Eurasian region under the RIC mechanism.

Under the RIC framework, the foreign ministers of the three countries meet periodically to discuss bilateral, regional and international issues of their interest. India took over chairmanship of the RIC after the last meeting of the trilateral in Moscow in September last year.

"I believe that our cooperation in areas like trade, investment, healthcare, education, science & technology and politics etc could significantly contribute to global growth, peace and stability," Jaishankar said.

"This would be in line with our common ethos of recognising the 'World as a Family'. Our approach to global development should be human-centric and not leave anyone behind," he added.

The external affairs minister said the COVID-19 pandemic has shown the interdependence of an inter-connected world and the need of the hour is to have a 'One Earth One Health' approach.

"That means a timely, transparent, effective and non-discriminatory international response to global health challenges including pandemics, with equitable and affordable access to medicines and critical health supplies," he said.

Since joining the UN Security Council as a non-permanent member in January this year, India has been actively contributing to finding mutually acceptable solutions to international and regional issues, the minister said.

"We believe that a multi-polar and re-balanced world based on sovereign equality of nations and respect for international law and contemporary realities requires reformed multilateralism," he added.

The meeting took place in the midst of the lingering border row in eastern Ladakh. Jaishankar and Wang had a bilateral dialogue in September in Tajikistan's capital Dushanbe on the sidelines of a meeting of the Shanghai Cooperation Organisation (SCO).

In the talks, the two foreign ministers agreed that the military and diplomatic officials of the two sides should continue discussions to resolve the remaining issues in eastern Ladakh.