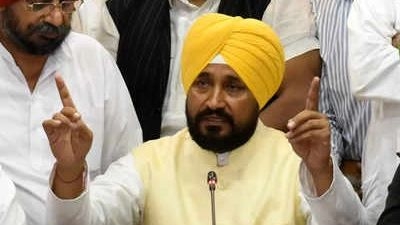 Condemning the unfortunate incident, Channi said that the reason behind this incident is three farm laws. "I along with my ministers met Governor Banwarilal Purohit and gave him the memorandum to repeal the three farm laws."

Notably, with the imposition of prohibitory orders, the Uttar Pradesh government on Monday denied permission to Punjab Chief Minister Charanjit Channi to visit the state's Lakhimpur Kheri, where violence broke out at a farmers protest on Sunday. The Chief Minister had planned to meet bereaved families.

The pposition parties today lashed out at the BJP government in Uttar Pradesh for not allowing their leaders to visit Lakhimpur. The opposition parties also accused some BJP leaders of making provocative statements and questioned the "silence" of Prime Minister Narendra Modi and Home Minister Amit Shah on the issue. The Congress said it would hold protests outside the offices of all district magistrates across the country on Tuesday to protest against the incident.

Meanwhile, Ashish Mishra, the son of Union Minister of State for Home Ajay Kumar Mishra, who is facing the accusations of allegedly ramming his car over farmers refuted all allegations that he was part of the convoy. According to a NDTV report, Ashish Mishra said, "I was not in the car. I was at my paternal home in Banwirpur village where a wrestling match was being organised. I was there from the morning till the end of the event."

The Uttar Pradesh government today announced that a retired High Court judge will probe the Lakhimpur Kheri violence and that the families of the four farmers killed in the incident will be given Rs 45 lakh compensation.