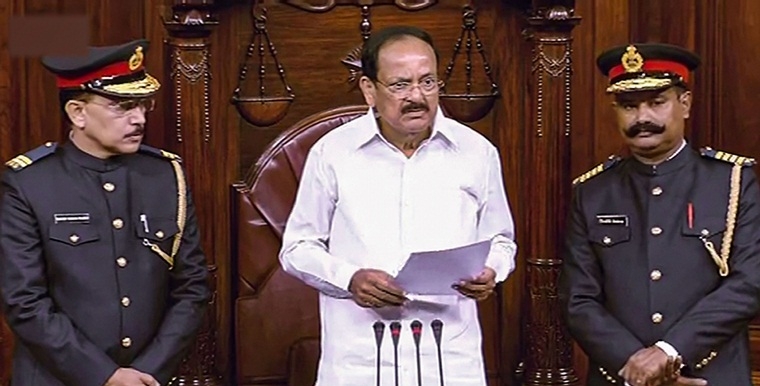 As the Rajya Sabha opened its landmark 250th session on Monday, its marshals got a makeover with their uniforms being restyled from traditional Indian attire comprising turbans to military-style outfits with caps.

Customarily, the presiding officer of the House is flanked by two marshals who march ahead of the chairman to announce the commencement of proceedings and also assist the chair in organising the desk and bringing up order papers. The uniforms were dark blue, with shoulder insignias, gold buttons and gold aiguillette -- ornamental braided cord worn on army or academic uniforms. The peaked cap resembles one worn by Army officers of the rank of Brigadier and above. The change did not please the army. Many of its former officers -- including former army chief, General VP Malik -- tweeted their disapproval. "Copying and wearing of military uniforms by non military personnel is illegal and a security hazard. I hope @VPSecretariat, @RajyaSabha & @rajnathsingh ji will take early action," VP Malik's tweet read. Union Minister V K Singh, a retired general of the Indian Army, said what has been done is illegal.

According to NDTV, the uniform also left political leaders vexed. Cutting across party lines, most elders were irked with the use of the caps and the emblems. The Congress's Jairam Ramesh was heard asking Vice President Venkaiah Naidu whether "martial law" has been imposed on the upper house.