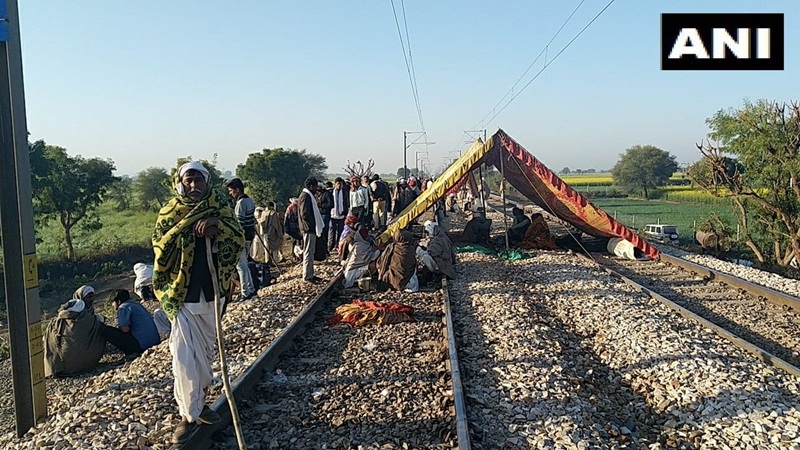 Sawai Madhopur (Rajasthan): A section of the Gujjar community demanding reservation, have erected tents on railway tracks in protest, leading to the cancellation of several trains in the Kota division.

As part of the reservation movement, the protesters occupied the tracks near Malarna Dungaar station in Maksudanpura village of Sawai Madhopur district. Following the protests, as many as four trains were diverted and 14 cancelled between Sawai Madhopur to Bayana section-Nimoda to Malarna block section in Kota Division of Western Central Railway.

One of the members of the protesting group said, “We have a good Chief Minister and a good Prime Minister. (But) We want that they listen to the demands of the Gujjar community. It isn’t an uphill task for them to provide reservation.” Earlier on Friday, the Gujjars staged a ‘rasta-roko’ dharna at the railway tracks in Rajasthan’s Swai Madhopur district, demanding implementation of the 5 per cent reservation that was promised to them by the state government.

The protest led by Gujjar leader Kirori Singh Bainsla of the Gujjar Arakshan Sangharsh Samiti (GASS) also affected the train movement on the Delhi-Mumbai line. On October 26 last year, the Rajasthan government passed a bill which increased Other Backward Classes (OBC) quota from 21 per cent to 26 per cent. In December 2018, the Rajasthan government also approved one per cent reservation for Gujjars and four OBCs. At present, these communities are getting one per cent separate reservation under the legal limit of 50 per cent reservation meant for the most-backwards category in addition to OBC reservation.