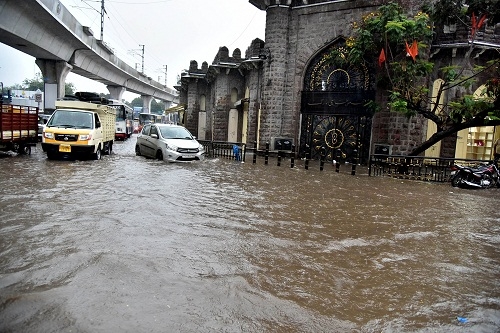 Rains pounded several parts of Telangana on Monday, even as the India Meteorological Department (IMD) warned that heavy rains are expected at isolated places in different districts of the state over the next 48 hours.

Rao directed the Chief Secretary to take all necessary precautions against any loss of life or property due to heavy rains forecast across the state for another two days due to the impact of cyclone Gulab, an official release said.

The rains will result in massive water pooling on roads and low lying areas in most places and agriculture land submerge /crop damage, it said, adding, thunderstorm accompanied by lightning with wind speed 30-40 kmph is very likely to occur at isolated places in all the districts.

The downpour caused waterlogging on some roads and low-lying areas.

Thunderstorm accompanied with lightning is very likely to occur at places in all the districts of Telangana.

Meanwhile, Somesh Kumar once again held a teleconference with District Collectors in the wake of heavy rains.