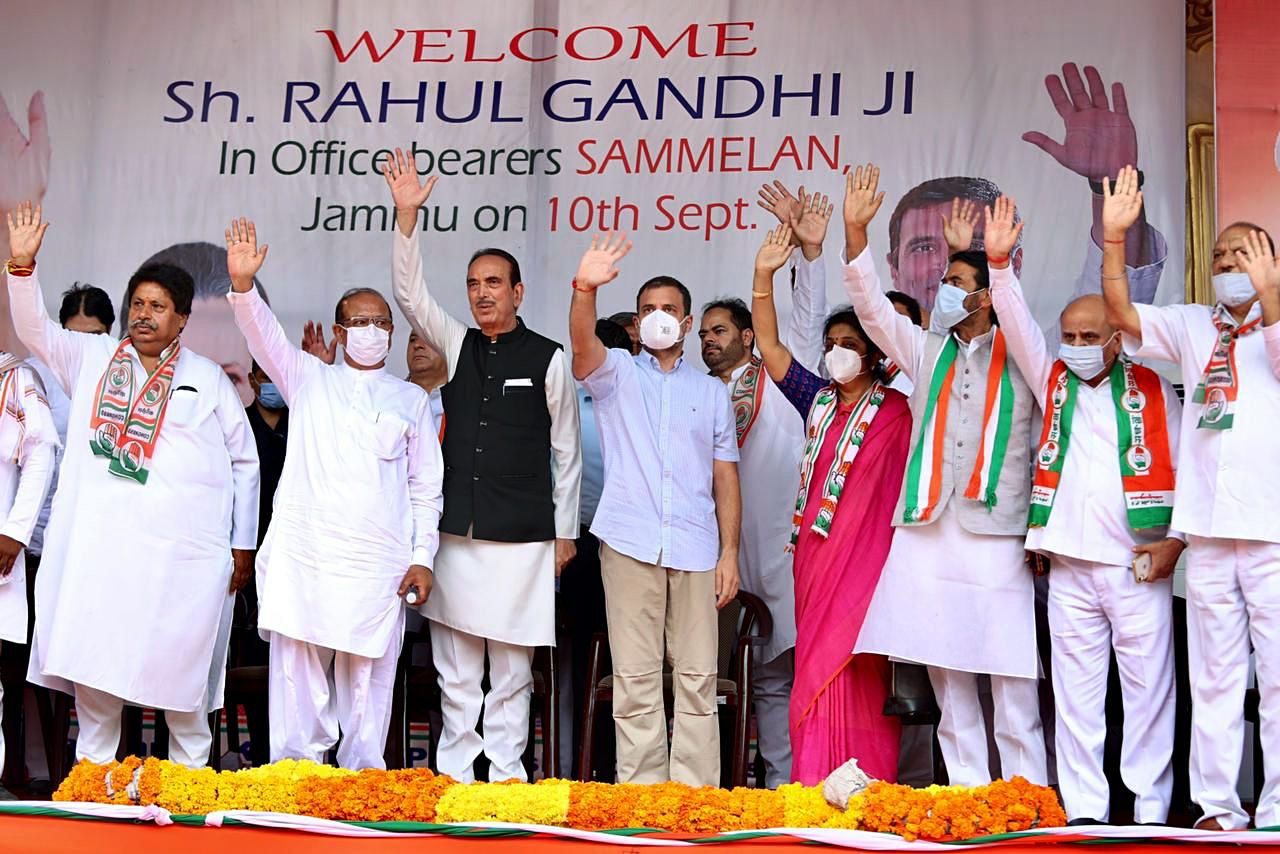 Congress leader Rahul Gandhi on Friday accused the Rashtriya Swayamsevak Sangh (RSS) and the Bharatiya Janata Party (BJP) of trying to break the composite culture of Jammu and Kashmir (J&K).

"The feeling of love, brotherhood and composite culture exists among you all. I feel sad that the RSS and BJP are trying to break this culture," Gandhi said in his address to Congress office-bearers and workers at a party function in Jammu. "They (RSS, BJP) attack love and brotherhood. You got weakened and as result, they took away your statehood," he added.

On the second day of his two-day visit to Jammu, the Congress leader exhorted the gathering to chant 'Jai Mata Di'.

Goddess Durga protects us, Lakshmi is a symbol of power, and Saraswati symbolises education and knowledge, he said. "When these three shaktis are in your home and country, your home and country will make progress," he added. However, the BJP government's policies like demonetisation and GST have weakened their powers, Gandhi said. Whereas, the Mahatma Gandhi National Rural Employment Gurantee Act (MGNREGA) and the GDP with a growth rate of 9 per cent under the Congress had increased their powers, he added.

Meanwhile, later in the day, the saffron party hit back at Rahul Gandhi. BJP national spokesperson Sambit Patra, in a press conference, alleged the Congress, for its petty vote bank politics, sacrificed not only the Kashmiri Pandits but also the development of the region.

Dubbing the the Gandhi scion "immature and irresponsible", Patra said, "The problems of Jammu and Kashmir are the legacy of the Gandhi family. It was Jawaharlal Nehru who was responsible for the problems of Kashmir." Astonishingly, Rahul Gandhi "very conveniently forgot that the woes of the Kashmiri Pandits were because of the politics of appeasement of Congress and like-minded parties", Patra said.

Hailing the Narendra Modi government and Union Home Minister Amit Shah for the abrogation of Artice 370, the BJP spokesperson said it ended all discriminations against women, Schedules Castes and the "refugees" from Kashmir. "Under the leadership of Prime Minister Modi, Kashmir is now moving in the direction of development and inclusiveness," Patra added.