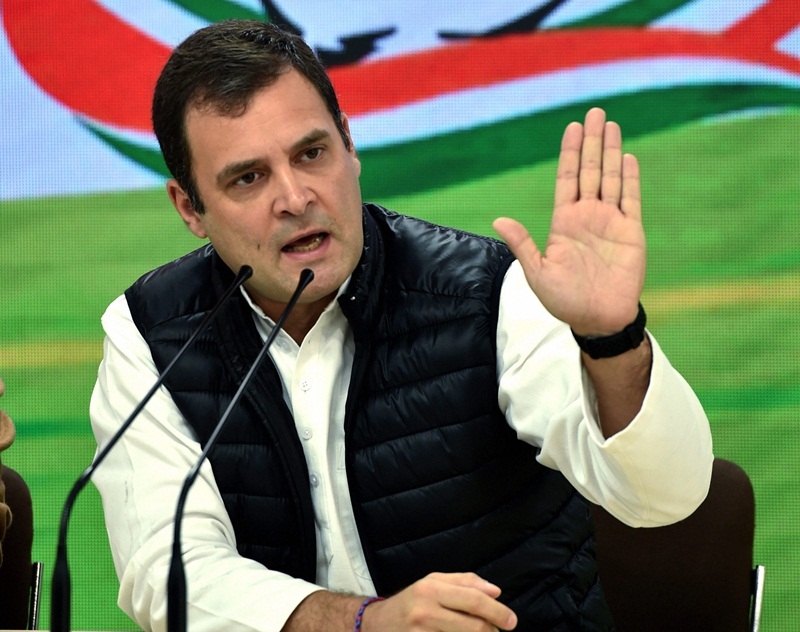 Kozhikode: Congress President Rahul Gandhi on Thursday launched the party’s Lok Sabha campaign in Kerala by attacking Prime Minister Narendra Modi on the Rafale deal and the ruling CPI-M over violence in the state. At a rally of the Congress-led United Democratic Front (UDF). Gandhi said an ideological battle was on between the BJP and RSS on the one hand and the Congress as well as its allies on the other.

The Congress party’s voice is that of the country and is an instrument for the people because we listen to all and it’s not the voice of ‘one person’ or of a particular community or religion,” he said.  “The Congress does not impose its thoughts on the people, but listens to all. “The job of a Prime Minister is to listen to the ‘Mann ki Baat’ of the people and not to tell his ‘Mann ki Baat’. He should have been humble to listen to the poorest of the poor.

Had he asked people about demonetization, they would have said it was nonsense,” said Gandhi. “Modi calls rich men like Nirav Modi and Adani as brothers whom he has gifted crores of rupees. One of his brothers was given all the ports in the country and he recently got six airports also, of which one is your airport (Thiruvananthapuram).

“I assure you that when we come to power, we will draw up a minimum income for all and deposit money to all those people who fall below that line,” said Gandhi. He said that a Congress government would ensure 33 per cent reservation for wom­en in all legislatures. “We will also reserve 33 per cent of all national jobs for women.”

Then taking on the CPI-M, he said he visited the homes of two young men who he alleged were killed by the Marxists. “The CPI-M thinks they can remain in power by killing people. No way. It’s not going to happen. These two young men will get justice,” said Gandhi.

“The only thing that the CPI-M government can do is to engage in violence. Ten thousand families was affected by the floods. The government has done nothing for them. This government here does not do anything to create jobs.