Lucknow: The Punjab government has finally given in to the pressure mounted by the Yogi Adityanath government to hand over custody of mafia don turned politician Mukhtar Ansari back to Uttar Pradesh.

In a letter to the state government, the Additional Chief Secretary Department of Home Affairs and Justice, Punjab government said that custody of undertrial prisoner Mukhtar Ansari will be handed over to the Uttar Pradesh government before April 8 in compliance with the Supreme Court order dated March 26.

The Punjab government has requested the Uttar Pradesh Home Department to make ‘suitable arrangements' for the transfer of the undertrial prisoner Mukhtar Ansari in view of his medical conditions and security reasons from Ropar Jail to Banda Jail in UP.

The letter has also asked the UP government to make arrangements for a hearing of a case against Mukhtar Ansari in Mohali Court on April 12 through video conferencing.

The ACS State Home department Awanish Awasthi reiterated that as per the Supreme Court order, the onus of shifting Mukhtar Ansari from Ropar Jail to Banda Jail is on the Punjab government.

“As per the Supreme Court order dated March 26, it is the responsibility of the Punjab Police to shift the undertrial prisoner back to Banda Jail. The state government has no plan to make any arrangement for his shifting from Punjab to UP,” said the ACS Home.

Meanwhile, security has been tightened further at the Banda Jail in view of shifting of the mafia don amid his bulletproof luxury Ambulance controversy. Two more police posts have been set up at the main gate of the Banda Jail and a high-secured barrack has been vacated to lodge the gangster there.

The Supreme Court order dated March 26 has also reached the MP-MLA Court in Prayagraj where about 40 cases against the mafia don are pending. The MP-MLA Court is the competent authority to decide where to lodge Mukhtar Ansari. 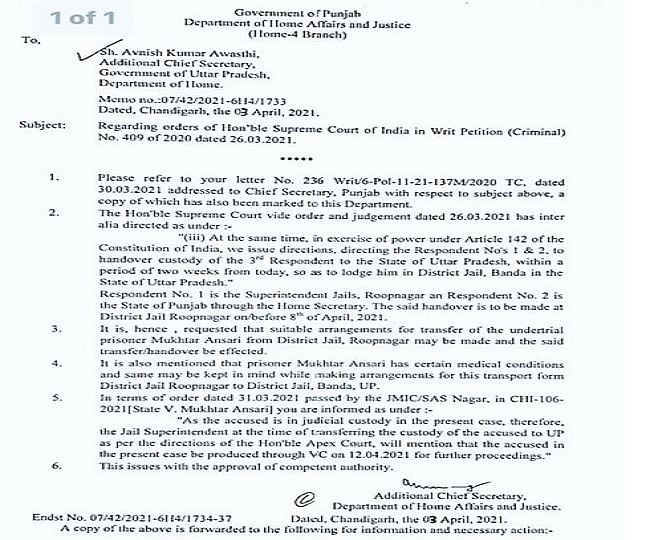