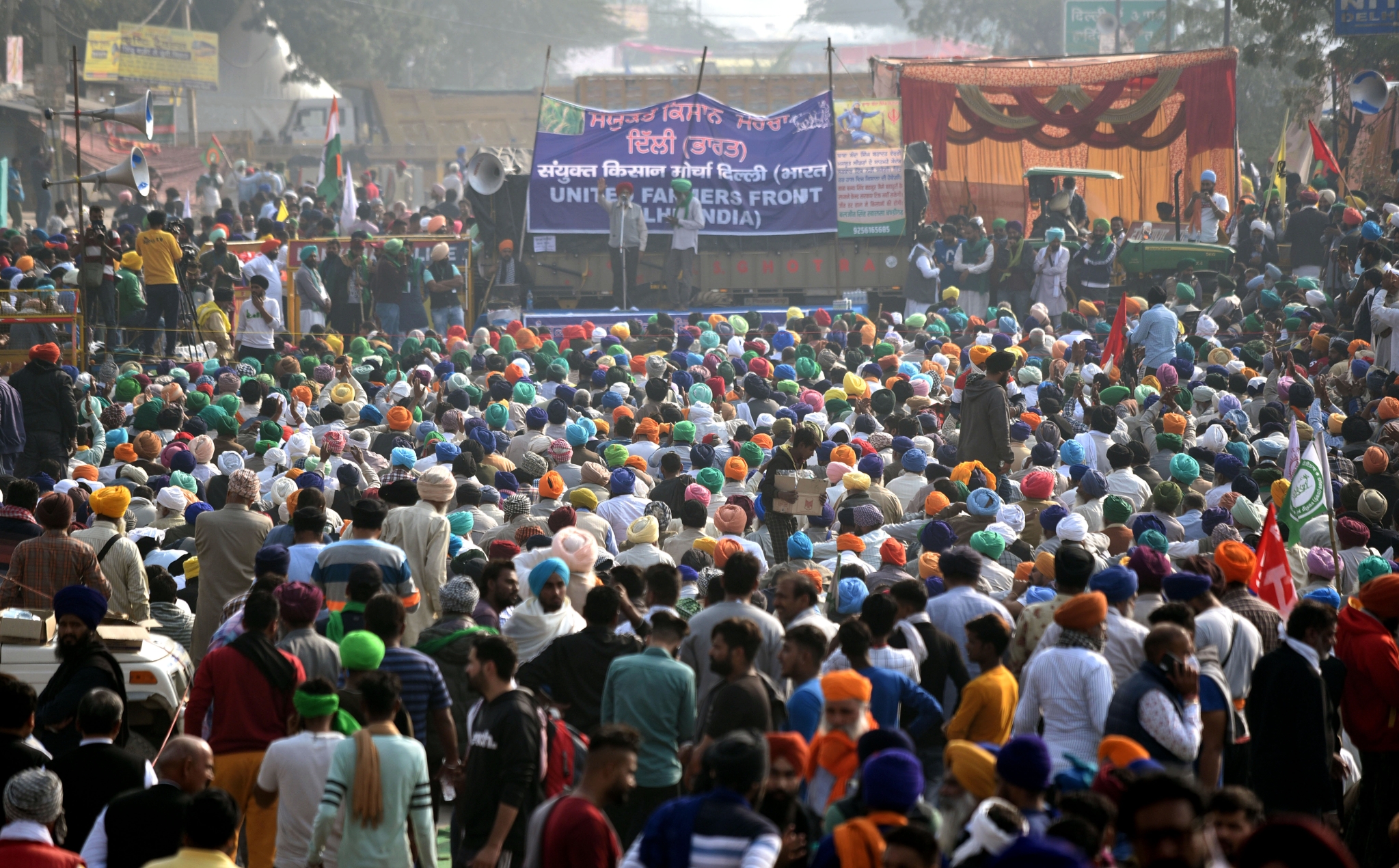 New Delhi: Scaling up their stir against the Centre's new farm laws, thousands of protesting farmers from Uttar Pradesh blocked National Highway-9 near the UP Gate on Thursday while those from Punjab and Haryana stayed put at other border points leading to the national capital as they remained adamant on their demands.

The protesting farmers had on Wednesday threatened to block other roads of Delhi in the coming days if the new agriculture laws are not scrapped soon. Security personnel at border points - Singhu, Tikri, Chilla and Ghazipur - stand guard, with the ongoing protests entering their eighth day.

The demonstrations are expected to continue as talks between three union ministers and a representative group of thousands of agitating farmers failed to yield any resolution on Thursday. Farmers refuse to budge; next round of talks on Dec 5

Bharatiya Kisan Union leader Naresh Tikait held a 'maha panchayat' at one of the protest sites -- Gazipur border. He said there was no midway for settlement on the issue of MSP, adding that the government must give assurance in writing to farmers.

Thousands of farmers, who were staying put at the Ghazipur Border under a flyover, suddenly started gathering with tractors at the NH-9 on Thursday leading to disruption of traffic from Ghaziabad to Delhi and later blockade of the busy stretch.

"The local police have closed the routes on NH-9 and NH-24 from Ghaziabad to Delhi. On NH-1, both sides of the route have been closed near Shani Mandir," the Delhi Traffic Police tweeted.

Farmers from several districts of western Uttar Pradesh continued their sit-in demonstration at the Chilla Border between Noida and Delhi amid heavy deployment of security personnel.

The protest also led to partial closure of a key road connecting Noida and Delhi. One carriageway of the Delhi-Noida Link road - from Delhi to Noida - was open for commuters, while the other side --- Noida to Delhi - remained closed, causing inconvenience to travellers.

Amid farmers protest, Akhilesh Yadav to start 'Kisan Yatra' across UP

Noida Deputy Commissioner of Police Rajesh S said, "The law and order situation is under control even though some protestors are continuing with their demonstration on and near the border." One of protestors at the Singhu Border claimed the new farm laws will pave way for the dismantling of the minimum support price system, leaving them at the "mercy" of big corporates.

From fixing cars and tractors free of cost to serving sugarcane juice to doctors attending to protestors, Rantir Singh, a mechanic from Punjab, has taken up many roles to ensure farmers camping at Delhi's Singhu border for the last eight days can continue their agitation.

"My brother, Jaswant Singh, is camping at the Tikri border and doing the same. He too is a mechanic," says Rantir, from Punjab's Barnala district. Rantir said he has travelled all the way from his village where he has a garage.

"I have already fixed 30 to 35 tractors of the farmers here at Singhu border. This is 'sewa' for which we do not charge anything. I have also repaired two to three cars," Rantir told PTI. The Delhi-Haryana border at Jharoda and Jhatikra remained closed for traffic movement. The Badusarai border is open only for two-wheeler traffic.

However, people can travel to Haryana through Dhansa, Daurala, Kapashera, Rajokri, NH 8, Bijwasan/Bajghera, Palam Vihar and Dundahera border points, the traffic police have said. The police also kept the Haryana-Delhi border at Singhu and Tikri closed for traffic for the eighth day on the trot.

On Wednesday, the seventh day of the protest, the farmers demanded that a special Parliament session be convened to repeal the new farm laws. The farmer unions also called for a nationwide protest on Saturday to oppose what they claimed was the "corporatisation" of farming.