Many of the farmers, threatening to block all five entry points into the capital, said they are aware the infection is still raging but the Centre's new farm laws are a bigger threat.
PTI 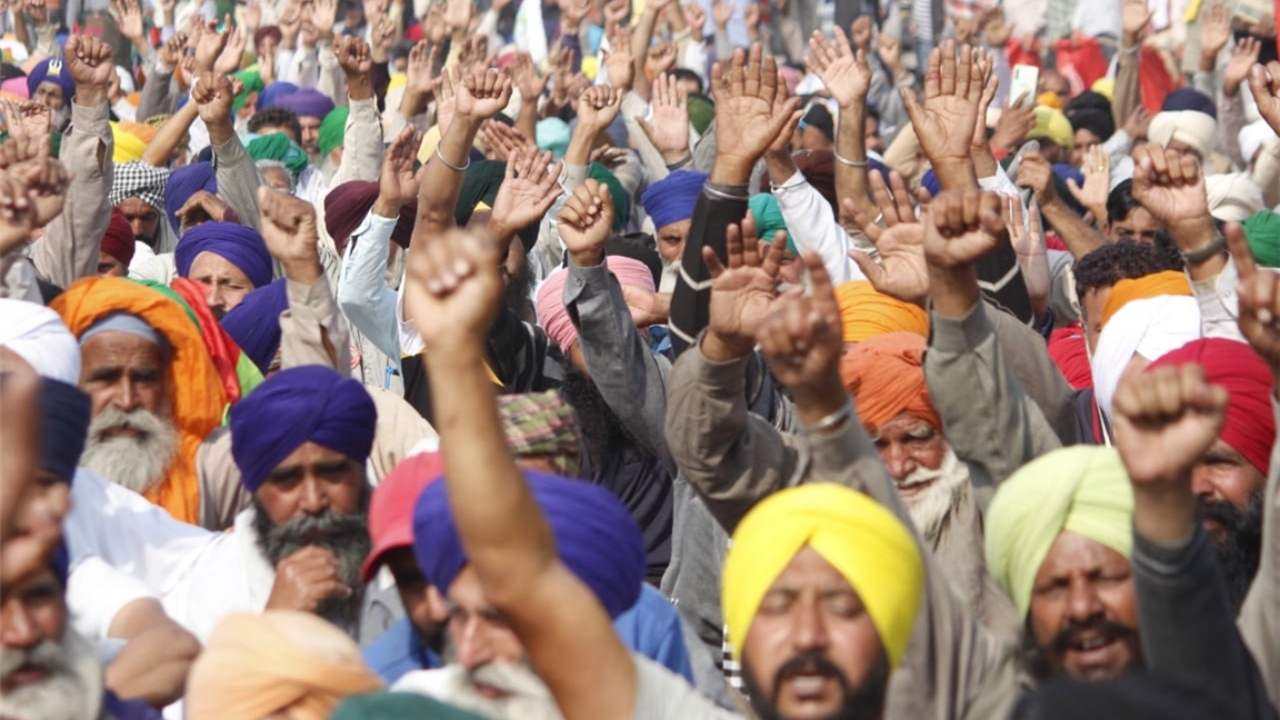 The shadow of the pandemic looms large and experts warn their agitation could well be a COVID-19 superspreader but farmers, some in masks and many without them, protesting in Delhi and at gateways into the city say the new farm laws pose a greater threat to their survival.

As thousands of farmers, mostly from Punjab and Haryana but also from Uttar Pradesh and Rajasthan, protest at the national capital's border points and in north Delhi's Burari ground for the fifth day on Monday, COVID-19 continues its spread. There have been few signs of social distancing during the protests that started last week with the farmers, banded under various organisations, leaving their homes and moving towards Delhi.

"A protest is a mass gathering and thus from a public health perspective, I would urge protective and preventive behaviour against the spread of coronavirus infection, failing which a superspreading event might set in," cautioned Dr Samiran Panda, head of the Epidemiology and Communicable Diseases division at the Indian Council of Medical Research.

Seeking strict compliance with norms, he said it is important to note that SARS-COV-2 is a transmission efficient virus and such gatherings are conducive to its spread.

Many of the farmers, threatening to block all five entry points into the capital, said they are aware the infection is still raging but the Centre's new farm laws are a bigger threat.

Gurmeet Singh from Faridkot in Punjab, for instance, has been at the Burari ground, one of the largest in the city, for three days and counting. And he has no intention of moving.

For him, and hundreds of other farmers at the North Delhi ground where they were allowed to congregate, the three contentious farm laws are a bigger disease.

"We may even survive corona, but how will we survive this cruel law that will take away our bread and butter," Gurmeet told news agency PTI.

In another corner of the sprawling ground, a team of seven medicos from Delhi's AAP government has tested over 90 farmers for COVID-19 since November 28.

"There have been no positives as yet," said a medical officer on the condition of anonymity.

"We tested 40 people on the 28th, then another team took over, and today we have tested 50 people so far," the officer said.

Several e-rickshaws roamed the ground to create awareness of the disease and the necessity of wearing masks and maintaining hand hygiene. But the message appeared to be getting drowned out in the slogans, protest songs and speeches.

Gursharanjeet Singh from Bilaspur, Uttar Pradesh, said his family is entirely dependent on produce from their six-acre farm.

"If we stay careful we won't get corona, but if we don't protest against these farm laws and this government we will definitely die of hunger," he said.

His desperation finds resonance at the Singhu and Tikri border points, where farmers have been camping in large numbers.

Some volunteers were distributing masks to the protesting farmers.

As the farmers, many who came in tractor-trolleys and trucks in preparation for a long haul, continued their protest, two doctors, Sarika Verma and Karan Juneja, were at Singhu, urging farmers to wear masks and maintain social distancing.

"We are also offering treatment if anybody faces any problem or injury," Verma said.

Delhi has already been witnessing a spike in COVID-19 cases post Diwali celebrations and with pollution levels increasing. On Sunday, the city recorded?4,906 new COVID-19 cases on Sunday and 68 fatalities, taking the total number of cases to 5,66,648 with 5,22,491 recoveries.

The number of India cases is 94,31,691 with 38,772 new infections, according to Union Health Ministry data on Monday.

Dr K K Aggarwal, president of the Confederation of Medical Association of Asia and Oceania (CMAAO) and former IMA president, said the farmers' agitation should not have been allowed by the government.

Politics should never get precedence in a pandemic, he said.

"Government has the powers under the Diseases Epidemic Act to take control of any situation which can spread the infection," he said.

"The farmers' agitation will end up in superspreading events which will not only be a danger to Delhi but also to the whole country," he asserted.

As experts worry at the lack of safeguards to prevent the infection from spreading, Bhartiya Kisan Union (Ekta Ugrahan) president Joginder Singh Ugrahan said the farmers fear they will lose their livelihoods.

"The new farm laws brought by the (Narendra) Modi government are a bigger threat than coronavirus," the farmer leader told PTI over the phone.

Kisan Mazdoor Sangharsh Committee general secretary Sarwan Singh Pandher asked why coronavirus posed a serious threat to life only during the farmers' agitation, and not during the recent Bihar assembly polls.

"When Bihar elections took place, where was COVID-19? When any political gathering takes place, where is coronavirus" he asked, an apparent reference to the election rallies.

He claimed the issue comes up only when farmers begin an agitation for their rights.

A spokesperson for the BKU's Haryana unit led by Gurnam Singh Charuni said farmers are trying their best to keep COVID-19 at bay.

"As much as we can, we are trying to follow the guidelines. But at the moment thousands of farmers are saying that getting the Centre's farm laws rolled back is the first priority as these will anyway destroy them," he said.

He said it is now up to the Centre to accept their demands.

When asked if they fear that the infection may spread as thousands have gathered over a large area, he said, "No farmer fears this disease at the moment. All they have on their minds is to get these laws rolled back."

At the Sonipat border, a Haryana Health Department official said they have so far distributed 5,000 masks to the protesting farmers.

"Also, after every kilometre we have stationed an ambulance," he said.

Mobile toilets have also been installed at various points and sanitisation is being regularly carried out, he added.

The health department also plans to carry out random tests for COVID-19.

The contentious laws are the Farmers' Produce Trade and Commerce (Promotion and Facilitation) Act, 2020, The Farmers (Empowerment and Protection) Agreement of Price Assurance and Farm Services Act, 2020 and The Essential Commodities (Amendment) Act, 2020.

Unions have expressed apprehension that the new agri-marketing laws enacted at the Centre will lead to the dismantling of the minimum support price (MSP) system, leaving farmers the mercy of big corporates.

The government, however, says that the new laws give farmers options to get higher prices for their crops and the MSP regime will still continue.