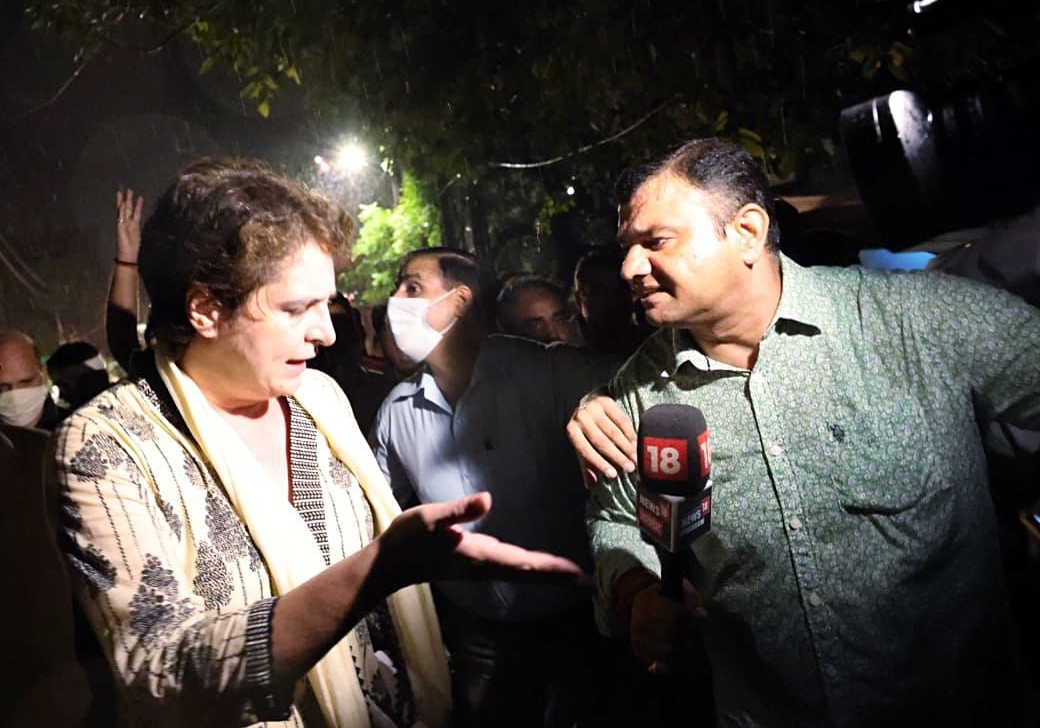 Congress General Secretary Priyanka Gandhi Vadra speaks to the media on her way to Lakhimpur Kheri at Hargoan, in Sitapur on Monday. | ANI

Congress general secretary Priyanka Gandhi Vadra sat on a hunger strike on Monday after being detained in Uttar Pradesh's Sitapur district while she was en route to Lakhimpur Kheri, her party said.

As Vadra began her dharna in a PAC guest house in the district, Congress leaders protested outside and raised slogans against the BJP-led state government over her "arrest".

State party leaders, including spokesperson Akhilesh Singh, swept the road outside the campus of the 2nd battalion of the Provincial Armed Constabulary (PAC) during the agitation.

A 42-second video released by UP Congress spokesperson Vikas Srivastava showed Priyanka Gandhi sweeping a room in the guest house, where she has been detained, in Sitapur district which is adjacent to Lakhimpur Kheri.

"Priyanka ji has one demand that she wants to meet the farmers," Srivastava added.

The UP Congress said in a tweet, "Congress general secretary Priyanka Gandhi has been arrested. She is on hunger strike. Congressmen are protesting. Government will have to bow to our demands. Voice for justice will be raised with more strength." Several protesting Congressmen vented their ire against the Yogi Adityanath government's "high-handed" approach.

"This is a government which unleashes terror. It commits atrocities and does not even allow to people wipe the tears of the poor," Akhilesh Singh told PTI.

The AICC general secretary rushed to the state on Sunday night after violence broke out during a farmers' protest against the visit of Deputy Chief Minister Keshav Prasad Maurya to the native village of Union minister Ajay Kumar Mishra. Eight people, including farmers and BJP workers, were killed in the incident.

Priyanka Vadra and other Congress leaders accompanying her, including Deepender Hooda, had reached the Lakhimpur border in the morning but were not allowed to meet the families of the farmers who died in the violence during a protest a day earlier, the party alleged.

On their way to the violence-hit district, Congress leaders had to take alternative routes to reach the bordering Hargaon area in Sitapur as heavy security was deployed on the main roads.

"We are waiting outside Lakhimpur Kheri. We have been prevented by the police from entering. We have come here to meet the victims of the violence," Congress national secretary Dheeraj Gurjar told PTI over the phone at 4.30 am.

Gandhi's convoy was earlier briefly stopped by Uttar Pradesh Police officials in Lucknow, where the Congress general secretary had arrived on Sunday night, within a few hours of violence being reported during an anti-farm laws protest here.

UP Congress spokesperson Krishnakant Pandey said it was on October 3, 1977 when former prime minister Indira Gandhi reached Belchi village in Bihar on an elephant and met the families of those who were victims of the massacre. The result was that the Janata Party was voted out of power, and now history will repeat itself in the 2022 UP assembly polls, he added.

"The BJP will be wiped out. Injustice is being done to Priyanka Gandhi," Pandey said.

With elections in the political heartland nearing, Priyanka Gandhi, who is leading the grand old party's efforts to regain its lost ground in the state, is using the incident to attack the BJP-led state government.