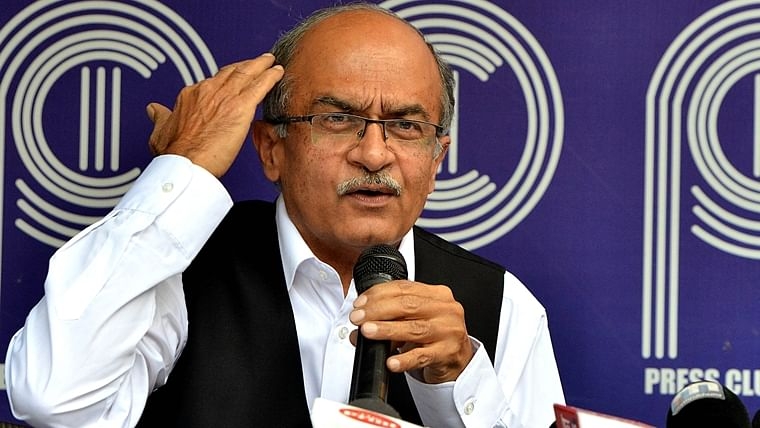 Advocate Prashant Bhushan on Thursday challenged the Supreme Court order convicting him of contempt of court and asking him to cough up a fine of Re 1 over his two tweets, including one on Chief Justice of India Sharad Arvind Bobde.

The lawyer has prayed for an open court hearing of his review petition and reference of the larger question of the constitutional importance pertaining to contempt of court.

In the review petition filed through his colleague Kamini Jaiswal, he argues that the possibility of being barred from practising in the Apex Court was not discussed during the hearing, but while imposing the token fine of Re 1, the court had held that he will be barred for a specific period of time.

"At no point was the petitioner put to notice that the court was contemplating such a drastic action against him," says the petition, though the contingency of default does not arise since the fine stands paid.

He wanted a bench of appropriate strength to decide on three questions arising from the case. These questions are:

b. Whether a summary procedure in cases of criminal contempt which is not ex facie curiae is compatible with Part III of the Constitution of India?

c. Whether, in view of the fact that the suo motu proceedings for contempt of a constitutional court call for the court to act both as aggrevied and as adjudicator, the provision of a right to an intra-court appeal is necessary in interest of public confidence and the fundamental rights of accused persons under Articles 20, 21, 22 and 32 of the Constitution of India?

Bhushan has also highlighted that he was not furnished a copy of the complaint filed against him as required under the Rules to Regulate Proceedings for Contempt of the Supreme Court, 1975, and he was prevented from filing an additional reply when his preliminary reply was found to be unsatisfactory.

"The petitioner was further denied an opportunity to lead evidence under Section 17(5) of Contempt of Courts Act, 1971, to substantiate averments in his preliminary reply."

The Court's sentencing was based solely on his preliminary reply, and the denial to allow him to lead evidence is also a violation of the established rules governing the contempt procedure, it is further said.

"The denial of opportunity to lead evidence is not only in explicit contravention of the Contempt of Courts Act, 1971, but in the teeth of judgement of Co-ordinate bench in R.K. Anand v. Delhi High Court, (2009)."

While Bhushan sought to put up a defence against the charges of contempt, the same was viewed as an "aggravation" by the court. This, Bhushan says, is an error apparent in the judgment. This also goes to violate Article 20(3) of the Constitution, the plea states.

"The finding of an “aggravation” of contempt amounts to a fresh conviction and violates the constitutional protection against double jeopardy contained in Article 20(2) of the Constitution. Further, this additional conviction is arrived at on facts not specifically put to the accused and not tried and deserves to be treated as a violation of the right to fair trial guaranteed under Article 14 and Article 21."

Bhushan was convicted and sentence in a suo moto contempt case on August 31 by a 3-judge Bench headed by Justice Arun Mishra, who demitted office shortly thereafter.