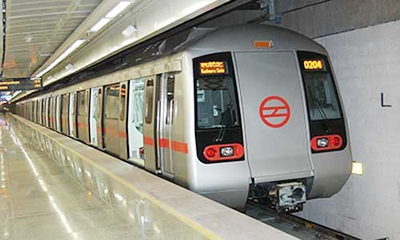 New Delhi: The country-made pistol which was used by a man to shoot himself inside a Delhi Metro station was cleverly sneaked in the premises inside a bag from an unmanned area near a customer care counter, security agencies probing the incident have found. 22-year-old Shivesh Kumar is alleged to have shot himself in the busy Rajiv Chowk Metro station yesterday after he boarded the Metro from Chandni Chowk, underlining the vulnerability and security scare the rapid transport network of the national capital faces.

Officials said the CISF has found CCTV footage of last evening’s incident where Shivesh is seen quickly lifting a bag from over the low-height glass wall partition at the Chandni chowk station, which is created to demarcate the free and security-hold area in a number of Metro stations.

They said Shivesh was with his sister when he entered the said station. While we went for frisking, his sister stopped at the counter with two bags. She then kept the bags on an elevated platform near the glass wall and Shivesh is later seen lifting one of the bags from over the glass partition in which it is suspected the ‘desi katta’ (local pistol) was kept, they said.

His sister and the second bag went through normal frisking and scanning respectively and hence they were cleared for travelling. “It looks the act was deliberate on the part of Shivesh. He is being questioned by the police now,” they said.

The paramilitary force has handed over the CCTV footage of the said incident to police officials probing the case. CISF officials probing the incident said they have requested the Delhi Metro Rail Corporation (DMRC) to immediately make arrangements to scale up the height of the glass wall so that no one can transfer items like this.

“There are some structural deficiencies in some old Metro stations and CISF has asked DMRC to upgrade them. This is a work in progress. While on some stations the height of the glass partition has been increased beyond a normal person’s reach, say about 6-ft, on some stations it is being done,” a senior official said.