In a candid admission that Pinarayi Vijayan’s face may no longer be a marketing asset for the party, the CPI-M has dropped the chief minister’s photo from all its election material for the local body polls.
K RAVEENDRAN 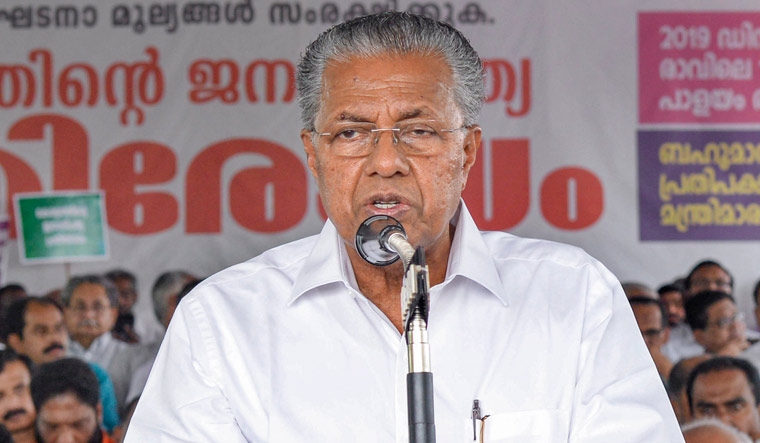 Thiruvananthapuram: In a candid admission that Pinarayi Vijayan’s face may no longer be a marketing asset for the party, the CPI-M has dropped the chief minister’s photo from all its election material for the local body polls.

The ruling Left Democratic Front’s election campaign is also marked by the absence of the chief minister in the meetings of ruling front candidates.

It takes considerable embarrassment for the party leaders to explain such a departure. So-called party intellectuals such as M V Govindan, who is a Central Committee member, seek to justify Pinaryi Vijayan’s absence, claiming that there is no need for the chief minister to campaign for the local body elections.

He insists that although Vijayan’s photo is missing from election posters and hoardings, it is the chief minister himself who is leading the LDF in the elections. The energy for the campaign continues to be provided by the chief minister, he avers.

Political observers believe gone are the days when a mere frown from Pinarayi Vijayan was enough for the red flag at the party headquarter AKG Bhavan not to flutter. A growing section of the party believes that the chief minister may be a liability in times of election, as no other chief minister of Kerala has ever faced such corruption charges.

The CM’s left-hand man, former principal secretary M Sivasankar is in the custody of central investigation agencies, answering questions about his direct involvement in gold smuggling and other scams, while his right-hand man, additional private secretary C M Raveendran has been summoned by the investigators in connection with alleged benami deals.

With new disclosures coming on a daily basis, the shadow of investigations is lengthening to the chief minister himself and for the first time, the CM’s family is also under a cloud.

Key accused in the twin scams of gold smuggling and housing commission, Swapna Suresh and P S Sarith have been recording their confidential deposition for the third day running. A court decision on the bail application of Sivasankar has referred to the involvement of ‘big sharks’ in the gold smuggling and money laundering cases.

The investigators are now planning to question Sivasankar and Raveendran together, which might bring forth answers to many unanswered questions. This is expected to make the chief minister’s position even more vulnerable.

This has emboldened a dominant section of the party to question the authoritarian ways of the chief minister, who has so far enjoyed complete control of the party and the government. Vijayan’s detractors have used Vijayan’s embarrassment in having to bow down to the demand for the withdrawal of the controversial Police ordinance and the open ‘revolt’ by finance minister Thomas Isaac in questioning the Vigilance raids at the offices of a finance ministry corporate body.

It is in this context that observers view the absence of Pinarayi photos from the election campaign material, which was unthinkable for most part of his unchallenged control of the party and the government.