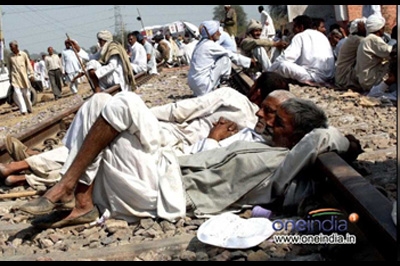 New Delhi: Expressing concern over the damage to public and private properties during violent protests, the Supreme Court on Wednesday said it would lay down “parameters” to fix accountability for losses on organisers as the country cannot be held to “ransom”.

“The country must know what the consequences are. No one can take the country to ransom during agitations. Whether it is the BJP, the Congress or any other organisation, they must realise that they can be held accountable for the damages to public property,” a bench headed by Justice J S Khehar said.

The observation, which came during the hearing of a plea of Gujarat Pattidar leader Hardik Patel, assumes significance in the wake of large-scale violence and loss of public and private properties in Haryana during the Jat quota stir.

The bench, also comprising Justice C Nagappan, said that irrespective of organisation, the organisers of such violent protests would be made accountable for the damages. “Where is our country going? You just cannot burn the country’s or its citizens’ properties. Whether it’s the BJP or the Congress or whichever organisation or party it is, it may be asked to pay for the property damaged. They will collect the money and pay for the damages,” the bench said.

It added, “We must take a call on the issue and we would frame guidelines for taking action against people indulging in such acts.” The bench was hearing a plea of Patel seeking quashing of sedition charges and the FIR lodged against him.

Attorney General Mukul Rohatgi, appearing for the Gujarat government, said Patel had in his plea challenged the FIR against him but a charge sheet has already been filed in the case. “Now after the FIR, the charge sheet has been filed and it cannot be tested in the Supreme Court,” Rohatgi said. The bench said that in his prayer the petitioner (Patel) was more concerned about bail and not the charge sheet. To this, Rohatgi replied that his bail applications are already pending before the Sessions court.

The court then said that it has decided to look into the larger issue of damage to public and private properties during agitations and posted the matter for hearing on Thursday.