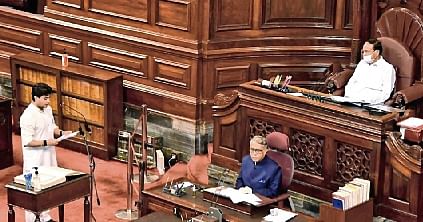 A belated brief monsoon session of Parliament is expected to be held in the last week of August, with either one House sitting in the morning and another in the afternoon or the two hold sittings on the alternate days.

Lok Sabha Speaker Om Birla and Rajya Sabha Chairman M Venkaiah Naidu have jointly decided to outsource supply of screens to be fixed between the members to prevent any kind of spread of the infection.

The arrangement tentatively worked out is to sit the members in both the chambers of the Lok Sabha and the Rajya Sabha as also in the Central Hall and the visitor galleries, ensuring the 2-yard distance to be maintained and giant TV screens will be installed to enable the members watch the proceedings sitting any where and audio network is augmented for listening.

The Government has been intimated to list the minimal of the business it wants transacted during the brief session and accordingly dates of the session will be finalised, sources in the Lok Sabha secretariat said.

This is for the first time the oath-taking of the members took place in the House chamber during the inter-session period, maintaining norms of physical distancing due to Covid-19. When the House is not in session, the oaths are administered by the Chairman in his own chamber, but it was felt too small to accommodate 45 and hence the decision to use the main chamber of the House.

Harivansh, the deputy chairman of the Rajya Sabha re-elected on the JD(U) ticket, was among those who took the oath.

Others included AICC general secretary (organisation) KC Venugopal elected from Rajasthan, Bhubaneswar Kalita who had defected to BJP from the Congress, and former union minister Prem Chand Gupta, who has been re-elected from Bihar as the Rashtriya Janata Dal (RJD) member. Those administered the oath included 36 elected for the first timers and 9 re-elected to the House. Members, including three women, took oath/affirmation in eight languages besides English and Hindi, namely Telugu, Bodo, Kannada, Manipuri, Marathi, Oriya, Tamil, and Bengali. The Rajya Sabha secretariat said those who could not make it on Wednesday will take oath/affirmation during the ensuing monsoon session.

Those who took the oath were among 61 elected to the Rajya Sabha from 20 states in the recent biennial and by-polls, including 12 sitting members re-elected.