Only Akalis are prospering in Punjab: Rahul 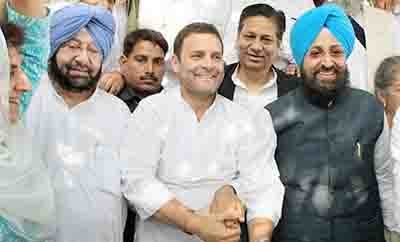 Faridkot : Rahul Gandhi on Thursday hit out at the ruling Shiromani Akali Dal, saying only Akalis are prospering in Punjab and stressed the Congress is united in the state as he along with two feuding state leaders met the families of the two youths killed in police firing here.

Rahul, who arrived here by train to meet the families of the youths killed during protests against incidents of sacrilege last month, said, “Right now no one, but the Akalis are prospering in Punjab. Only they (Akalis especially Badals) seem to have a future. We want that everybody in Punjab is prosperous in the future.”

“I can’t see anyone’s future here (Punjab). Punjab is in crisis… Farmers have problems here…drugs are a big problem,” he said. With his eyes on the assembly elections and the growing factionalism in the state unit, Rahul said, “Congress in Punjab will collectively fight for the future of Punjab, its farmers, Dalits and labourers and change the present government (in 2017 Assembly polls)”. “Congress will change the present SAD-BJP government by giving a united fight. All the senior leaders of party in Punjab have given me an assurance that they would remain united for the better future of the state,” he said while pointing towards various state leaders accompanying him including state unit chief Partap Singh Bajwa and former Chief Minister Amarinder Singh.  He, however, cautioned the state leaders that a divided Congress would not attain its aim.