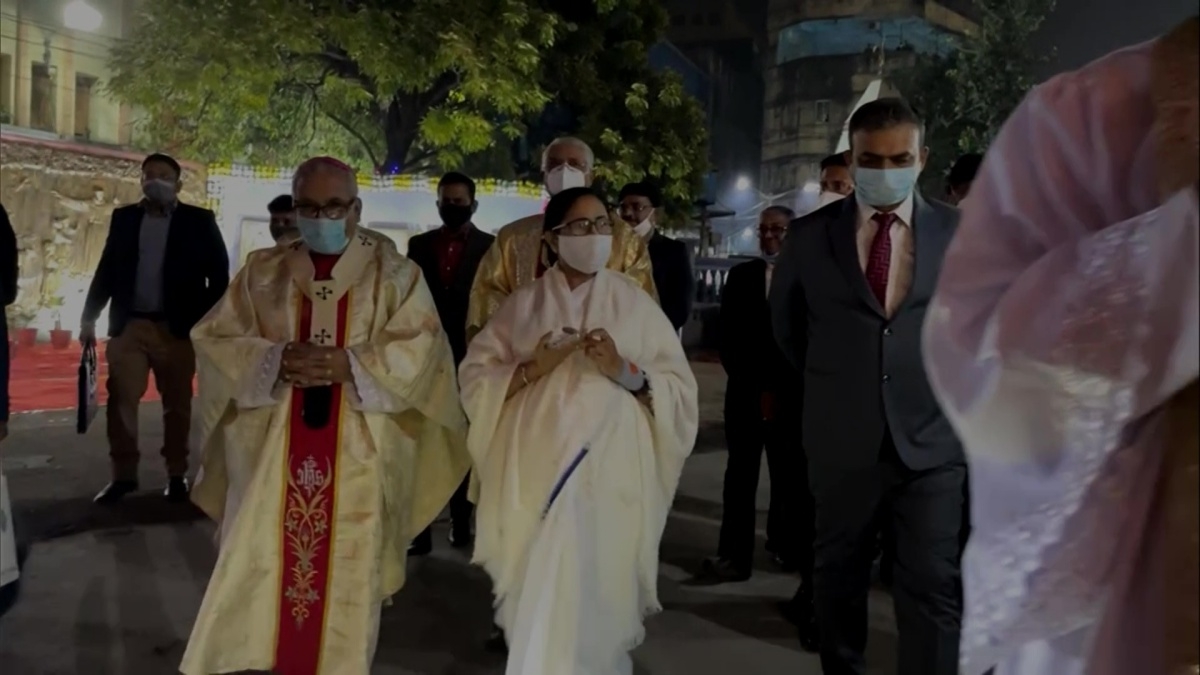 On the Christmas eve, West Bengal Chief Minister Mamata Banerjee attended the midnight service at the Cathedral of the Most Holy Rosary in Kolkata. In a video shared by the CM on Facebook, Ms Banerjee can be seen offering prayers at the religious place.

Earlier this week, the CM had inaugurated Christmas festivities in Kolkata’s Park Street but did not waste an opportunity to talk about her recent visit to Goa.

Referring to her visit to Basilica of Bom Jesus where relics of St. Francis Xavier are preserved, the Chief Minister said, “I was telling the Archbishop [Archbishop of Kolkata], I have seen St. Xavier’s memorial and touching the wall. It was the first time I saw it and I was astonished. I am so proud that I got the opportunity to visit…”

Banerjee said that at a time of alleged political controversy in the entire country everyone should stand by each other.

Praising the Christian community for lending help to everyone, the Chief Minister said that the Church and Christians ‘with smile on their face’ always help everyone without discriminating.

“Religion is one’s own but celebration is for everyone. Kolkata is the only place where Christmas celebration happens ahead of other states,” said Mamata while opening the carnival at Park Street’s Allen Park.

Meanwhile, in a setback to Ms Banerjee's Trinamool Congress party in Goa, former Goa legislator Lavoo Mamlatdar earlier in the day resigned from the party, accusing it of being communal and trying to create a divide between Hindus and Christians for votes ahead of the state Assembly polls.

The former Ponda MLA had joined the Mamata Banerjee-led party in the last week of September. He was among the first few local leaders in the state to join the TMC, which has decided to contest all 40 seats in the Goa Assembly polls, due in February 2022.

He also alleged that the TMC was collecting the data of people in the name of rolling out a welfare scheme for women in the state if it is voted to power after the elections.