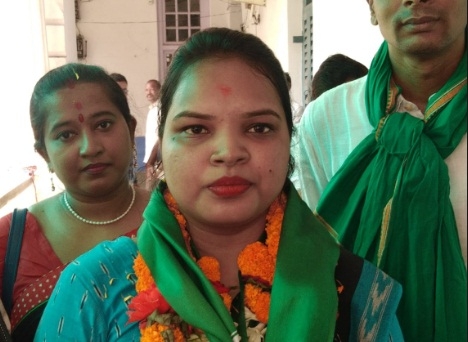 Bhubaneswar: With Odisha sending 33 per cent women legislators to the Lok Sabha, the lower house of Parliament will also have a woman MP from the state as its youngest-ever member. Chandrani Murmu, a 25-year-old engineering graduate, has been elected on a Biju Janata Dal (BJD) ticket from Keonjhar Lok Sabha seat, reserved for scheduled tribes. At the age of 25 years and 11 months, Murmu is all set to create history by becoming the youngest Lok Sabha member ever. She defeated two-time BJP MP Ananta Nayak by a margin of 67,822 votes.

A few months ago, she was just like any other girl who was searching for a job after completing her B. Tech from Bhubaneswar-based SOA University in 2017 and preparing for competitive exams. “I was in search of a job after completing my engineering degree. I had never thought that I would enter politics and become an MP. My nomination was unexpected and came out of the blue,” said Chandrani. She expressed her gratitude to the people of Keonjhar and BJD chief Naveen Patnaik for giving her the opportunity to serve the people.

Notably, her maternal grandfather Harihar Soren was a two-time Congress MP from 1980-1989. However, the family of Murmu was not active in politics. Indian National Lok Dal’s Dushyant Chautala was the youngest MP in the 16th Lok Sabha. He was elected at the age of 26 from the Hisar Lok Sabha seat in 2014. Odisha has a total of seven women MPs, making it the first state ever to have 33 per cent or the largest share of women MPs of its total of 21 seats.