Sambalpur: A 30-year-old man was arrested for allegedly beheading an eight-year-old girl and roaming with the severed head across a village in Odisha's Jajpur district on Friday, police said.

The motive behind the macabre incident, which sent shockwaves at the village in Jamankira block, is yet to be ascertained, they said.

The girl had gone to relieve herself at a farmland in the morning, following which the accused went there with an axe and beheaded her. Later, he roamed the village holding the severed head, went to a tube well and washed it.

The accused's wife indulged in a heated argument with him when she saw it, but he threatened her with an axe. The accused slept on the ground there then.

Police rushed to the spot and arrested the man. Preliminary investigation revealed that he was an alcoholic, but did not have any animosity with the family of the deceased, Kuchinda subdivisional police officer Rajkishore Mishra said.

"We're yet to ascertain what was going on in his mind when he committed the crime," the officer said.

According to the villagers, indulging in arguments with his family was a regular affair for the accused, who is a father of two daughters, but he is not a mentally deranged person.

The weapon was seized and the girl's body sent for autopsy, Jamankira police station inspector Premjeet Das said, adding that an investigation was on. 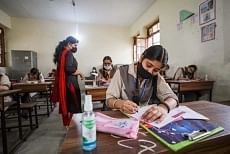