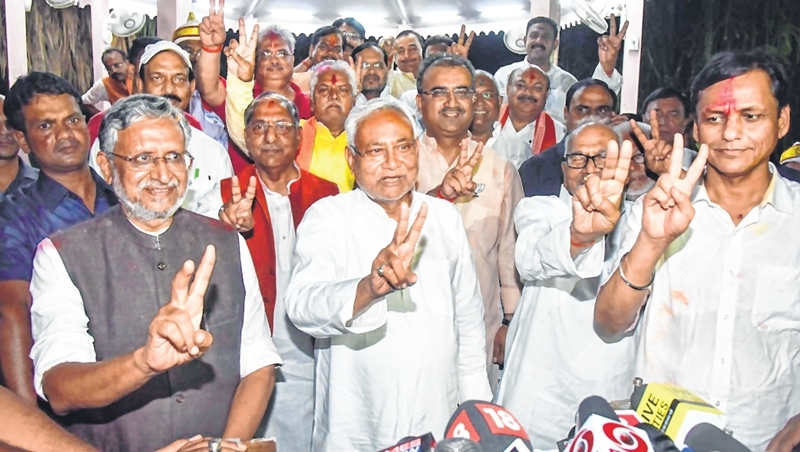 Patna: With the ruling NDA having established a comfortable lead in 38 of the 40 Lok Sabha seats in Bihar, the opposition Grand Alliance is struggling to maintain a lead on the remaining Jehanabad and Kushanganj seats.

After several rounds of counting of votes, the National Democratic Alliance (NDA) was heading for a big win in the state.  According to official sources, the NDA has won in over a dozen seats, including Darbhanga, Vaishali, Maharajganj, Sasaram, Gaya, Valmikinagar, Ujiyarpur, Begusarai, Patna Sahib and Jamui, but a formal declaration has not been made so far.

In the remaining seats, the NDA candidates were leading by a big margin. Union Minister and Bharatiya Janata Party (BJP) candidate Giriraj Singh was ahead of his Communist Party of India (CPI) rival Kanhaiya Kumar by over 2.5 lakh votes in Begusarai. Other Union Ministers, who maintained a steady lead were R.K. Singh in Arrah, Ashwani Kumar Choubey in Buxar, Ravi Shankar Prasad in Patna Sahib, Ram Kirpal Yadav in Patliputra and Radha Mohan Singh in East Champaran.

In Patna Sahib, Union Minister and BJP candidate Ravi Shankar Prasad was leading by over 1 lakh votes against sitting MP Shatrughan Sinha, who was contesting on a Congress ticket. Rashtriya Janata Dal (RJD) candidate Misa Bharti was trailing by over 30,000 votes from Patliputra after leading since morning against her rival, Union Minister Ram Kripal Yadav.