Bihar Assembly Election: Centre’s grant made state what it is today, says Nadda 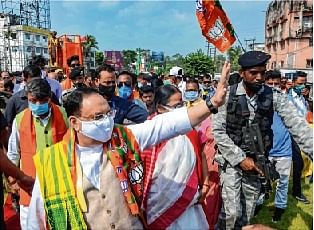 Contrary to the claim by CM Nitish Kumar Bihar developed fast in the last 15 years under his leadership, BJP national president JP Nadda on Tuesday said the state could develop only because the Centre gave liberal financial aid in the last six years.

Speaking at two election meetings at Ara and Buxar in the third leg of his campaign, Nadda gave a detailed break-up of the assistance Bihar received from the Centre and said PM Modi gave money for development of infrastructure, communications, roads and power projects in the last six years.

Nadda claimed the PM had arranged free ration for the migrants who returned to the state till November and financial assistance of Rs1,000 a month was deposited in their accounts.

Uttar Pradesh CM Yogi Adityanath, who also addressed 3 meetings on Tuesday, took credit for taking care of the migrant workers during the pandemic. He recalled when Bihari migrants were forced to leave Delhi and they attempted to come to Bihar marching with their families, officials of UP government came to their rescue by giving them drinking water, arranging for baths and arranging free bus service to their villages in Bihar.

This was in clearly in contrast to the stand of Nitish, who had opposed plans of the Rajashtan and UP govts to shift the migrants to Bihar. The chief secretary of Bihar had written a protest letter to the Union home secretary asking him to prevent Bihari migrants from coming to the state as their arrival would lead to a virus’s spread.

HomeIndiaBihar Assembly Election: Centre’s grant made state what it is today, says Nadda