‘My child would have been alive…mourns a father’ 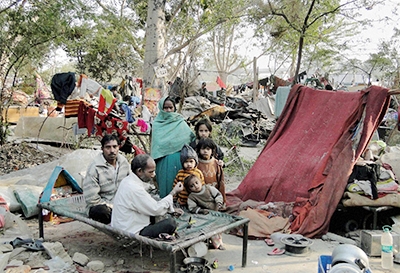 New Delhi: People collect their belongings after a demolition drive carried out by railways in Shakur Basti of Delhi on Sunday. PTI Photo (PTI12_13_2015_000223B) |

New Delhi : After the railways razed their shanties, residents of the Shakur Basti slum on Sunday picked up pieces of their lives from debris strewn all over, even as father of the toddler in the midst of a row said his child would have been alive had officials shown generosity and given some time.

Throughout the day, people rummaged through the remains of the shanties, predominantly inhabited by families of workers of the nearby cement siding, in hope of recovering their bare essentials.            Mohammad Anwar sat by his wife, who had entered a state of stupor since the couple lost their six-month-old child, whom they had lovingly named Rukaiya. “As the officials came knocking, we started quickly packing our belongings. In the ensuing melee we did not realise when a heap of clothes fell on her which turned out to be fatal,” Anwar said, staring blankly.

Anwar was not oblivious of the fact that the death of his child had triggered a fresh round of confrontation between the Delhi government and the Centre, with Chief Minister Arvind Kejriwal demanding a murder case to be registered in the case.      “My child, who had just started seeing the world, would have been by my side today if the officials had shown generosity and given us little time and a prior notice,” Anwar said. The couple has two more children, one girl aged five and a boy aged three.

Delhi Urban Shelter Development Board (DUSIB) has put up makeshift tents, that dotted parts of the cement siding, where few hundred families have been accommodated.

As evening descended people sat huddled around fires to shield themselves from the chill, which only intensified as the night fell. People, in large numbers, also queued up to submit photocopies of their identity cards such as voter cards, Aadhar cards, arguably their most prized possession to Delhi government officials camping in the area.