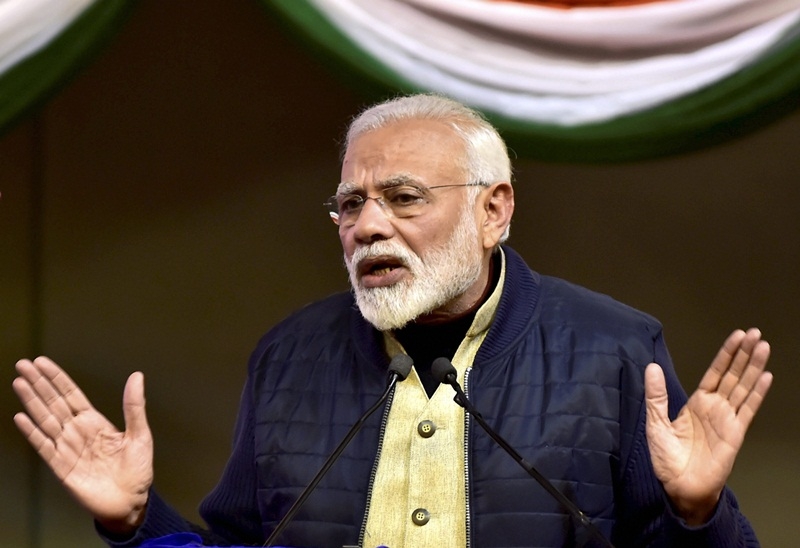 Jalpaiguri: Prime Minister Narendra Modi on Friday launched a scathing attack on West Bengal Chief Minister Mamata Banerjee, accusing her of trying to save those who defrauded the poor in the chit fund scams, and said that none of the offenders will be spared.

“It has happened for the first time in the history of the nation that a Chief Minister sat in a dharna in support of those who looted thousands of poor people. She is trying to protect the looters and those who ruined the lives of the poor,” Modi said while addressing a public rally at Churabhandar in the state’s Jalpaiguri district.

Banerjee held a 45-hour sit-in protest in the hub of Kolkata following an ugly face-off between the CBI officers and personnel of the Kolkata police, when the federal probe agency had shown up near the residence of the Kolkata Police Commissioner Rajeev kumar to quiz him in the ponzi scheme scam case.

“Today, Bengal has such a Chief Minister who stands with those who looted the hard-earned money of thousands of poor. The people of Bengal want to ask her why she is so scared of the probe into the chit fund scam. Why is she holding dharna for those who are accused of callousness in probing the scandal,” Modi questioned.

“I want to assure all the families who suffered in the Saradha, Narada and Rose Valley scams that the ‘chowkidaar’ (guard) will not spare anybody. Be it the looters or their protectors, no one will be spared,” Modi said. “They can assemble as many people as they want to hold dharnas, and gather as many leaders as possible, the people who looted the poor will be punished. I want to assure the sufferers of the chit fund scams that those who brought such adversities upon them will be put to justice,” he said.

Meanwhile, the PM inaugurated the Jalpaiguri circuit bench of Calcutta High Court but West Bengal Chief Minister took objection to it claiming that her government as well as the court were kept in the dark. “Land is ours, circuit bench is of the high court. Neither the groom nor the bride is there but the band wala has come,” Banerjee said about the inauguration of the circuit bench, accusing Modi of hijacking it.

A Calcutta High Court official said there was no communication from the Centre or the state government regarding the inauguration of the bench. Mamata accused Modi of doing politics by inaugurating projects “hurriedly” ahead of the elections after the PM inaugurated a circuit bench of the Calcutta High Court in north Bengal.