Maha Twist: Away from limelight, how BJP stitched an alliance with Ajit Pawar 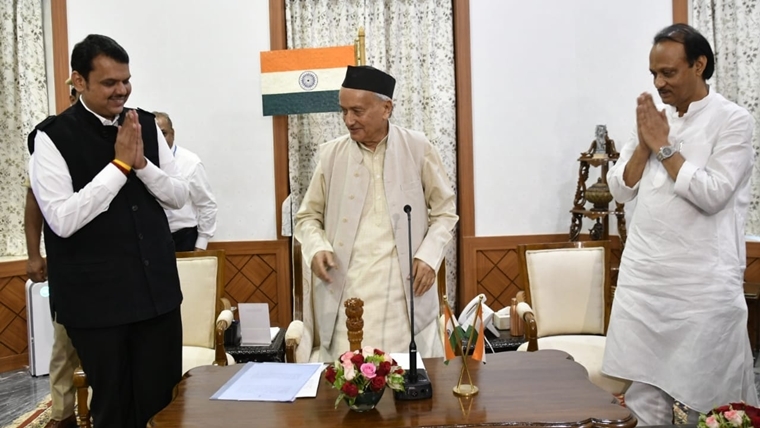 In the wee hours of the morning, Maharashtra got a government. But not one that people had been led to expect. Until yesterday, what we knew was that the "Maha Vikas Aghadi" as they were coming to be known was in the final stages of decision making.

Even till Friday evening, Sena leaders had reiterated that Uddhav Thackeray would be the CM and Prithviraj Chavan even reassured people that the Congress and NCP had "completed discussions on all issues" and were now in "complete unanimity".

But contrary to what you might think, nothing really changed overnight. There had been hectic but hushed discussions between the BJP leadership and NCP's Ajit Pawar for several days. BJP supremo Amit Shah had put one of his top lieutenants, Bhupender Yadav in-charge of the job. Yadav incidentally is the party's general secretary and is in charge of elections in Maharashtra.

One might recall the BJPs assertations that it would form the government (they maintained that there's was a 100% chance of this happening) and Shiv Sena's insistence along similar lines. It would appear now that it was not all empty words.

Even as the Sena-Congress-NCP held talks to negotiate the government formation, the BJP kept quiet. As the talks were announced closed on Friday, Yadav was rushed to Mumbai to for talks with Sharad Pawar's nephew. Yadav reportedly reached Mumbai at 7 pm on Friday and began working on a final deal, writes the Indian Express.

Until last week the BJP had tried to keep its options open when it came to the Shiv Sena, but when that ship sailed, they began looking into alternatives. On November 10 the BJP was compelled to tell the Governor that it was unable to form the government in Maharashtra as it did not have the required numbers. Soon after, the Shiv Sena and NCP too were unable to show the required mandate, following which Maharashtra was put under the President's Rule. Reportedly Yadav was rushed to Mumbai for a meeting of BJP's core committee before taking the call.

Reportedly, the BJP wanted the Maha Vikas Aghadi to continue to "play their game" while the BJP worked quietly to form their government. Although Shah had not visibly intervened in the ongoing tussle, his plans were placed into motion from November 10. Even as they cobbled together their own alliance with the NCP, the BJP watched the power struggle and negotiations unfold.

The NCP's communique to the Governor stating that it did not have the numbers incidentally came from floor leader Ajit Pawar. Reportedly senior Congress leaders have also expressed their confusion at the fact that Ajit has been incommunicado during Sharad Pawar's meeting with the Prime Minister.

"He was again missing a day before the talks shifted to New Delhi,” added a Congress leader.

According to the Express report, sources said that the BJP was not going to let the Sena or any of its newfound allies dictate terms to it.

As matters seemed as though they were coming to a head, the BJP ceased its observation and took a call to act before it was too late. As mentioned earlier, Yadav was rushed to Mumbai, and now, the rest is history.

According to a senior BJP leader, Ajit Pawar is the legislative leader of the NCP and with his support, they had a comfortable majority with 105 seats of their own, the NCP's 54 and several independent MLAs bringing the count up to 174.

NCP chief Sharad Pawar says that it was Pawar's decision to join hands with BJP.

"Ajit Pawar's decision to support the BJP to form the Maharashtra Government is his personal decision and not that of the Nationalist Congress Party (NCP). We place on record that we do not support or endorse this decision of his," he tweeted.

It would seem that Ajit 'dada', as he is popularly known, has emerged from the shadow of his larger than life uncle Sharad Pawar.

Now, it remains to be seen what will come next.