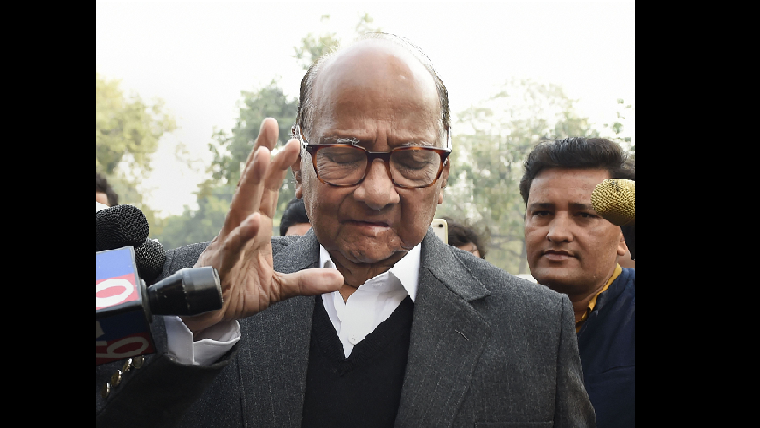 Mumbai: Trying to recover from the political earthquake at dawn, the Nationalist Congress Party (NCP) President Sharad Pawar said that the list of supporting MLAs submitted to Governor B.S. Koshyari by 'rebel' Ajit Pawar was not an official list of the party.

"It was the attendance sheet of MLAs prepared at a party meeting which has been given to the Governor as Ajit Pawar's support letter," Pawar said in a joint press conference with the Shiv Sena, endorsing what another senior party leader Nawab Malik said earlier in the day.

Shiv Sena President Uddhav Thackeray, who also spoke on the occasion, expressed concern over "the kind of political games going on in the country".

"First it was in Bihar, then Haryana and now Maharashtraa. They break parties and legislators, and we exposed them. We are together with the NCP now and shall take the future steps unitedly," Uddhav Thackeray asserted.

The senior Pawar said that the Sena-NCP-Congress alliance was on the verge of forming the government when he learnt of what happened at 7 am on Saturday.

"We have the total support of 169 MLAs, so we (three parties) came together. We have the numbers and were about to form the government. I am surprised how the Governor has done this today," Pawar said.

In a stunning political development, Governor Koshyari on Saturday morning administered the oath of office to BJP leader Devendra Fadnavis as the new Chief Minister of Maharashtra and NCP leader Ajit Pawar as the new Deputy Chief Minister.

Sharad Pawar reiterated that the NCP is not supporting Ajit Pawar's decision to go with the BJP along with some NCP MLAs.

"The NCP is totally opposed to this. It's an anti-party move and Ajit Pawar has flouted party discipline," Pawar said.He warned that henceforth, nobody from the NCP will remain present at Ajit Pawar's public meetings and anybody from the party tries to go would risk losing their membership.

"If they go with the BJP, how will they get re-elected? After they quit the NCP, we shall unitedly defeat them in the elections. Even for the swearing-in ceremony, some 10-11 MLAs had gone, but some (around half of them) have returned," Sharad Pawar pointed out.

Three NCP legislators, including Rajendra Shingne and Sandeep Kshirsagar, recounted how they got calls from Ajit Pawar at around midnight and were told to reach Raj Bhavan around 7 a.m. on Saturday.

"I had absolutely no idea of what was going on till I actually reached Raj Bhavan. It was only when the swearing-in ceremony started that I realised," said Shingne, a former minister and now NCP state Vice President.

All the legislators who were lured by Ajit Pawar asserted that they were still with NCP and had nothing to do with the breakaway group.