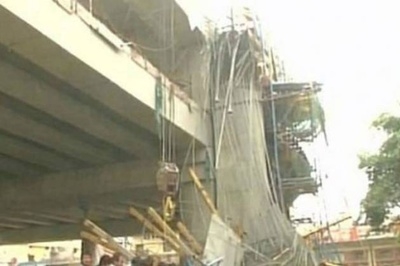 Lucknow: Eight labourers were injured, one of them seriously, when a shuttering between two under- construction pillars of Lucknow metro, a flagship project of Chief Minister Akhilesh Yadav, collapsed here today. However, there was no loss of life, District Magistrate Raj Shekhar said. He said eight workers were at the site when the incident occurred and all of them were taken out and rushed to a hospital.

While seven were released after first aid, one was referred to the trauma centre of King George’s Medical University Hospital here in a serious condition. The mishap took place hardly two weeks after a heavy slab of concrete fell on a car during metro construction when a two-inch screw came off a shuttering here.

The incident also triggered panic as it came a fortnight after a flyover collapse in Kolkata, which left 26 people dead.

“No one is trapped in the debris,” said Shekhar, who rushed to the spot along with Senior SP Rajesh Pandey to supervise relief operations and the removal of debris by diverting traffic.

“The incident took place at around 7 AM when a slab of 10×2 metre which was being cast near Alambagh bus station fell down,” the district magistrate said. “Rescue and relief works are going on. Administration, police and Lucknow Metro Rail Corporation (LMRC) teams are on job. We have also called National Disaster Relief Force (NDRF) personnel and they have reached the spot,” the DM said.

Cranes and bulldozers were immediately deployed to clear the area and ensure normal plying of vehicular traffic. Giving details of the incident, Pandey said the incident occurred when workers were filling concrete to reinforce the portion between two pillars at the busy Sujapura locality in Alambagh.

“I was drivin g my vehicle when suddenly this part of the pillar fell. It is Sunday, therefore, there is not much damage otherwise more people would have been injured,” a person present at the spot said.

An LMRC spokesman said, “Concreting work for the cross arm was going on at the site since midnight and it was about to be completed when the incident took place. The site has been cleared and the traffic has resumed.” The cross arm is used as a structural base to build the concourse level (middle level) of any metro station.

“A director-level inquiry committee, including safety experts from the general consultants, has been constituted for conducting an inquiry into the incident. The committee will submit its report soon,” he said. The Chief Minister said, “All safety precautions will be
taken. I will inquire about incident and issue directives to ensure safety of labourers. Those injured will be given free treatment.”

LMRC is facing a tight deadline to complete the 8.5 km-stretch of the metro rail project from Transport Nagar to Charbagh under the priority section. It has to run trains on trails by November 2016. With LMRC going full steam to meet the Transport Nagar-Charbagh deadline set by the state government, opposition BJP cautioned that safety and security should not be sacrified for
speed.

“To ensure its completion before UP Assembly polls, safety norms should not be overlooked, thus, putting lives of people in peril,” BJP spokesman Vijay Bahadur Pathak said. Yadav has promised to run the first phase of the Metro before the 2017 Assembly elections and at present a team of senior officials of the government and LMRC are in France to review a 3D presentation of the project and inspect the design of the the metro.

The team led by Housing and Urban Development Secretary Pandhari Yadav and LMRC Managing Director Kumar Keshav will hold a “detailed discussion” with experts of French firm Alstom which has the contract for the construction of the rail coaches.

The officials will learn about the interior and exterior of the Metro, and after finalisation of the design, the coaches will be constructed near Chennai. The accident occurred despite issuance of safety guidelines by LMRC. Even E Sreedharan, the principal advisor of LMRC, during his recent visit to the city had instructed the LMRC MD to enhance security arrangements as soon as possible. PTI