'Like cheating the democracy': Congress-NCP-Sena claim they can bring 162 MLAs before Governor 'at any given time' 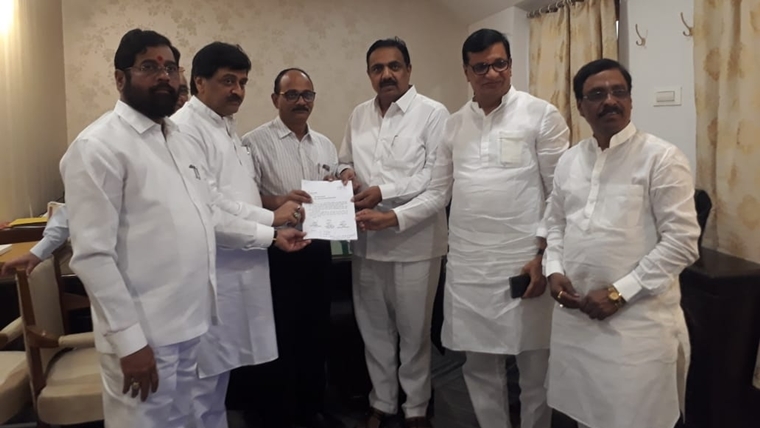 Mumbai: Nationalist Congress Party (NCP) leader Jayant Patil along with Shiv Sena leader Eknath Shinde, Congress leader Prithviraj Chavan and others visited Raj Bhawan here on Monday and said that they have given a letter showing the strength of 162 MLAs to the Governor.

"Today morning at 10 am, Shinde ji, Thorat ji (Maharashtra Congress chief Balasaheb Thorat), Chavan ji, Vinayak Raut ji (Shivsena), Azmi ji, KC Padvi (Congress) and I - on behalf of NCP, gave a letter to Governor showing the strength of 162 MLAs. We are in a position to bring 162 MLAs before Maharashtra Governor at any given time," said Patil while leaving from Raj Bhavan.

"We told the Governor that BJP doesn't have numbers. Even today they don't have the numbers and therefore the three parties (Shiv Sena, Congress and NCP) along with our allies want to stake claim to form a government and we did it today. We have 162 numbers which is more than the magic figure of 144," he added.

Senior Sena leader Eknath Shinde added, "In a democracy, only the majority number holds importance. We want that the minority government formed on November 23, should resign as they can't prove the majority. Those with the majority should be given the opportunity."

He demanded the resignation of Chief Minister Devendra Fadnavis and said that despite having the numbers the Maha Vikas Aghadi's claim was rejected and that it was "like cheating the democracy".

Patil further stated that the trio political parties are hoping that the Governor will accept and respect the mandate and ensure NCP, Congress and Shiv Sena form the government in Maharashtra.

He said that they also had the support of seven independent MLAs, apart from their original numbers.

At a time when deliberations among Congress, NCP and Shiv Sena on the formation of a non-BJP government in the state had seemingly reached a final stage, the BJP formed the government in a surprise development on Saturday morning when Fadnavis took oath for the second time as the Maharashtra Chief Minister, while Ajit Pawar was sworn-in as the Deputy Chief Minister of the state.

The BJP won 105 seats in the 288-member assembly in last month's assembly polls followed by Shiv Sena 56, NCP 54 and Congress 44. Although BJP and Shiv Sena got the mandate to form the government, the two parties parted ways over power-sharing.