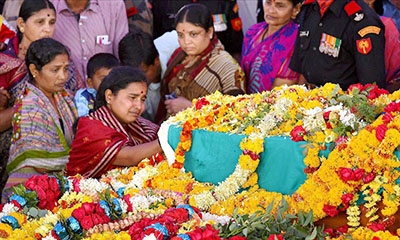 Hubbali : Wife of Lance Naik Hanumanthappa Koppad mourns near his mortal remains during his burrieal at Betadur village in Karnataka’s Dharwad district on Friday. Koppad was miraculously found alive after remaining buried under huge mass of snow for six days at Siachen Glacier, died in New Delhi on Thursday. PTI Photo (PTI2_12_2016_000209B) |

Dharwad : Thousands of people on Friday bid a tearful adieu to Siachen braveheart Lance Naik Hanumanthappa Koppad as his mortal remains were buried in his native village near here with state and military honours.

As Koppad’s body was lowered into the grave, a 21-gun salute was given amid the sounding of bugles by 20 soldiers from the Maratha Light Infantry Regimental Centre at Begalvi, which was preceded by a brief ceremony at Betadur in Kundagol taluk.

Koppad died in an army hospital in New Delhi on Thursday, three days after he was rescued and flown from the Siachen Glacier on Tuesday where he remained buried for six days when an avalanche struck Sonam Post on February 3.

Earlier, the body was kept at Hubli Nehru auditorium to enable the public to pay their last respects to the gritty soldier who battled for life after lying buried under tonnes of snow at the world’s highest battlefield.

The body kept in a wooden casket draped in the national flag was also kept at the Nehru ground at Hubballi, about 30 km from here, enroute to his native village about 430 km from Bengaluru, for the people to pay homage to the soldier.

Earlier, Koppad’s body was flown to Hubballi by a special Indian Air Force AN-32 aircraft on Thursday night along with his widow, mother, daughter and one of her brothers.

After the news of Koppad’s tragic death spread across the district through TV news channels and newspapers, hundreds of people began gathering at the stadium since 7:00 am on Friday. Koppad was posted in the 19th Battalion of the Madras Regiment, which he joined 13 years ago.