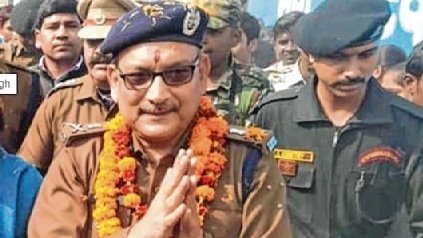 The 1987 batch IPS officer, Gupteshwar Pandey, who was in the limelight over the last two months following his comments against a section of Maharashtra politicians and the Mumbai police in the Sushant Singh Rajput death case, resigned from IPS and announced he was entering active public life. Whether he would contest the poll, the outgoing he­ad of the Bihar Police said, “Abhi Nitishji se baat nahi hui hai (till Tuesday evening, he addressed Nitish Kumar as ma­naniya mukhyamantriji).”

The state government appointed the Director General of Home Guards, a 1988 batch IPS officer, GK Singhal successor to Pandey. Singhal joined immediately. The Home dept of the state government had published the decision to accept resignation of Pandey and appointment of his successor on its website late on Tuesday night but it was removed on Wednesday morning. A notification said the three-months statutory advance notice for the VRS was waived Pandey’s case.

Pandey on Wednesday claimed he was popular among the Dalits too as he had worked of them as SP in several districts. He was the troubleshooter even in places where communal riots took place. He had controlled communal riots at Motihari and Sitamarhi within 6 hours.

He is the second IPS officer to enter the politics to contest the November election. Last week, Sunil Kumar, a Pandey’s batch-mate and chairman of the Police Housing Corporation, resigned and joined JD(U) to contest the election from the Bhorey constituency.

Work done by Modi-Nitish will be poll plank: Rudy

New Delhi: BJP MP Rajiv Pratap Rudy on Wednes­day said the Rs1.70-lakh crore package announced by PM Modi for Bihar has been implemented successfully and the JD(U)-BJP dispensation will return to power in the state after the upcoming assembly election on the basis of its performance.

Speaking in Lok Sabha during Zero Hour, Rudy said so many bridges have been built over the Ganga in Bihar and several speciality hospitals have been coming up, while the foundation stone has been laid for the Patna Metro project. Steps have been taken for expansion of the Patna airport while piped gas will be provided to the residents of the state capital soon.

Rudy said Bihar has seen tremendous development being carried out by a government led by an "innocent and simple" Chief Minister Nitish Kumar.

"The next elec­tion will be fought on the basis of work and performa­n­ce of the PM and the CM and our government will return to power after the polls," he said. —Agencies