In the latest development in Kerala Gold Smuggling case, the Enforcement Directorate (ED) on Saturday issued summons to main accused Swapna Suresh. The central agency has asked Suresh to appear before it on June 22.

Former Kerala legislator PC George had on Thursday slammed Chief Minister Pinarayi Vijayan over the allegations Suresh, and said that he wants to see the CPI(M) leader in jail for 14 days.

Suresh had revealed that she has declared in court about the involvement of Kerala Chief Minister Pinarayi Vijayan, his wife and daughter in the matter.

George termed the ruling Kerala government as the "most corrupt ever" to rule the state.

"This is the most corrupt government that has ever ruled Kerala. Based on the revelation of Swapna Suresh, a great deal of confusion has been created. Everyone is looking at it with great shock. According to Swapna, the Chief Minister and his wife, son and daughter were involved in discussions related to the Gold Smuggling Case. 21 times gold smuggling has not been caught. It was caught only once. This is all connected with the CM," he said.

Meanwhile, Sharply reacting to prime accused in the Kerala Gold smuggling case, Swapna Suresh's allegations, Chief Minister Pinarayi Vijayan hit back and termed it a "part of the political agenda".

"These comments by the accused are part of the political agenda. The public had already dismissed this agenda. After an interval, they are making the accused repeat the same statement. There is not even an iota of facts in this allegation. If you think that by spreading these lies, you can destroy the determination of the government and political leadership, I am reminding you that this is a futile exercise," he said.

Responding to his statement, Swapna Suresh, said that there was no "political or personal agenda" behind her allegation against Pinarayi Vijayan stating that the latter had taken a bag full of currency to the United Arab Emirates (UAE) in 2016. 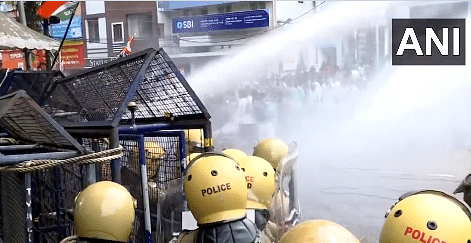