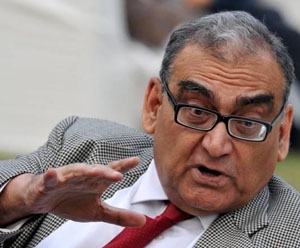 New Delhi : Press Council of India chairman Justice Markan-dey Katju kicked up yet another controversy, calling for unification of India and Pakistan as the only way to solve the Kashmir problem.

“The cause of the Kashmir problem is the partition of India on a totally bogus basis – the two nation theory, that Hindus and Muslims are separate nations….I don’t recognise Pakistan as a legitimate country because the whole basis is the two nation theory and I don’t accept the two nation theory,” he said. “Therefore the one and only solution to the Kashmir problem or the militancy problem in Pakistan is the reunification of India and Pakistan under a strong, central, secular, modern-minded government which just doesn’t tolerate bigotry,” he said and added that such a government would deal with fanaticism with an iron hand.

Addressing a seminar organised by the South Asia Media Commission here, he said that the two-nation theory was encouraged by the British post 1857 to create rift between Hindus and Muslims. “Many of my Pakistan friends, they agree now that what nonsense this two-nation theory is… the entire ploy was by the English and you people are a bunch of idiots,” Katju said.

Katju said that “90 per cent of Indians are idiots” who can be easily taken for a ride and added that it was very easy for mischievous people to incite riots even today. “Before 1857, there was zero percent communalism.

Today 80 percent Hindus and 80 percent Muslims are communal. This is the harsh bitter truth, I am telling you,” Katju said. “Why am I saying such harsh things, I don’t want to demoralise Indian people, I love Indian people, I love you all. I want you to prosper, I don’t want you to remain fools. I want you to understand the whole game,” he said. Katju said that even the educated people in India voted in elections on caste or sectarian lines which showed how backward people are. “I am saying all this because you need a big blow on your head to bring you to your senses, how backward you are. Unless you come to your senses and realise that you were taken for a ride by the British and later on by many communal forces which kept going on about Hindu-Muslim, the Kashmir problem cannot be solved,” he said.

With regard to the Northeast, he said these areas had been ignored for long and employment and job opportunities had to be created there.

Speaking about the role of the Press Council, Katju said that it only had powers to admonish and censure about which not many people bothered. He said that Press Council be given more powers.

The statement said media persons working in conflicts zones be it J&K or naxal-affected areas face threat to their lives and families.

It said state institutions are expected to provide adequate protection to journalists regardless of their views and that employers should give them a legal and monetary back up.

The statement said there is general apathy, as a result of which there is threat to free flow of information.