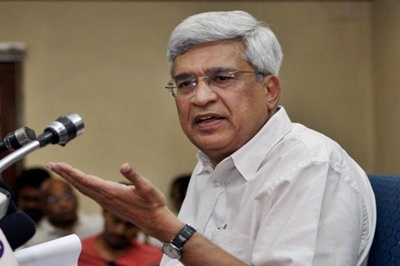 New Delhi: CPI-M leader Prakash Karat has described the bifurcation of Jammu and Kashmir and the abolition of Article 370 giving it special status as "a lightning strike against the Constitution and federalism" by the Modi government.

In a signed article in party journal "People's Democracy", Karat said to the government: "They have proceeded to launch a brazen attack on the very existence of Jammu and Kashmir by abolishing the state and dividing it up into two centrally-run Union Territories.

"All this has been done by stealth and by keeping the people of Jammu and Kashmir under confinement and coercion. "Even the manner in which the Presidential Order, the Resolutions and the Bills to annul Article 370 and dismantle the state of Jammu and Kashmir have been done through subterfuge constitutes a fraud on the Constitution," Karat said.

Karat accused the Modi government of violating Article 3, the Constitutional clause which sets out the process for changing existing state boundaries or creating new ones, by not ascertaining the views of the state legislature concerned. "In the RSS-BJP narrative, the Kashmir Valley is a hotbed of separatism and terrorism because of its religious composition," the article said. "Their inherently anti-Muslim bias makes them hostile to any democratic aspirations of the Kashmiri people."

Karat admitted that the BJP government's move to "integrate" Jammu and Kashmir by scrapping Article 370 had evoked support among various sections of people.

"It is being seen as the decisive way to end the problem of separatism and terrorism - the official narrative propagated by the Modi government. But the harmful long term implications for J&K and the country are not before the people."