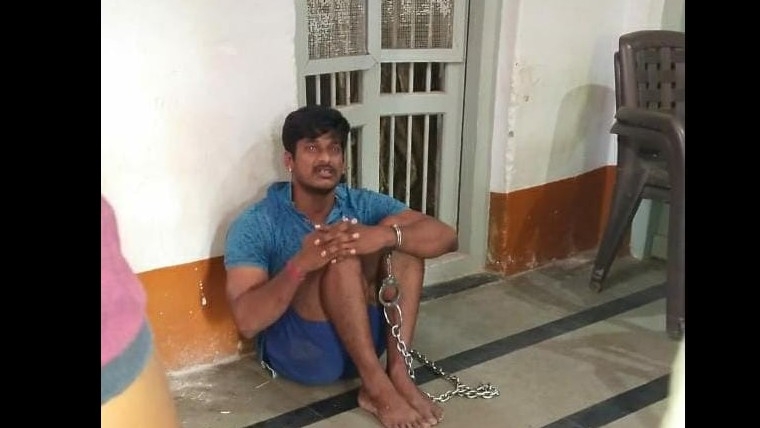 Bengaluru: Over-zealousness of the local police in implementing lockdown rules is well known, but things went a bit far when a CRPF commando was allegedly beaten up by the local police in Karnataka after he was caught without a mask in violation of coronavirus precautions.

The commando was in civilian clothes and on leave at his hometown Belagavi. He has alleged that he was beaten up, handcuffed and made to sit on the floor. His picture showing him chained went viral on social media.

Sachin Savant, the commando who was beaten up, belonged to the CoBRA or Commando Battalion for Resolute Action unit of the Central Reserve Police Force (CRPF). CoBRA is skilled in guerilla warfare and is usually involved in anti-Maoist operations.

A livid CRPF has written to the Karnataka Police chief, Praveen Sood, stating that the "unpleasant situation could have been avoided had the state police taken the CRPF hierarchy into confidence" before arresting commando Sachin Savant on April 23.

According to a senior officer quoted by the Press Trust of India, the CRPF is considering "a counter FIR against the atrocious action of the police". Coronavirus in Pune: More than 71,000 families to relocate; doubling rate higher than other cities

The CRPF, in a strongly worded letter, said the commando was "manhandled, ill-treated, paraded to the police station barefooted, kept in chains and handcuffs" by policemen enforcing the COVID-19 lockdown.

The police had a different story to tell. When two constables found him not wearing a mask, they asked him to do so. But "suddenly Sachin argued with the constables in filthy language and said, I am also a policeman of the CRPF. You don't ask me I will never follow your rules," the police said in its counter letter.

The letter claimed that the constables had "requested" the commando to wear a mask, but instead of obeying, he assaulted both of them.

He was immediately arrested and is in judicial custody.

"We have taken up the case with state police chief of Karnataka. His (Savant) bail plea is coming before the court on Tuesday and the CRPF too shall be in court through its local officers. A case investigation shall be followed up to take it to the logical conclusion," CRPF spokesperson Moses Dhinakaran told PTI.

The CRPF pointed out to the Karnataka police that in the video where Savant is being beaten up, "it is apparent that the conduct of police personnel was not citizen centric."

Meanwhile, Karnataka reported one more COVID death in Belagavi taking the total to 20. On Monday, the State recorded nine COVID positive cases, a major dip considering the figures a couple of days ago. Mumbai: Covid-19 claims life of 3rd cop in as many days