The movement against fee hike, the illegally passed hostel manual and to save public education, has been running for close to two months now.
IANS 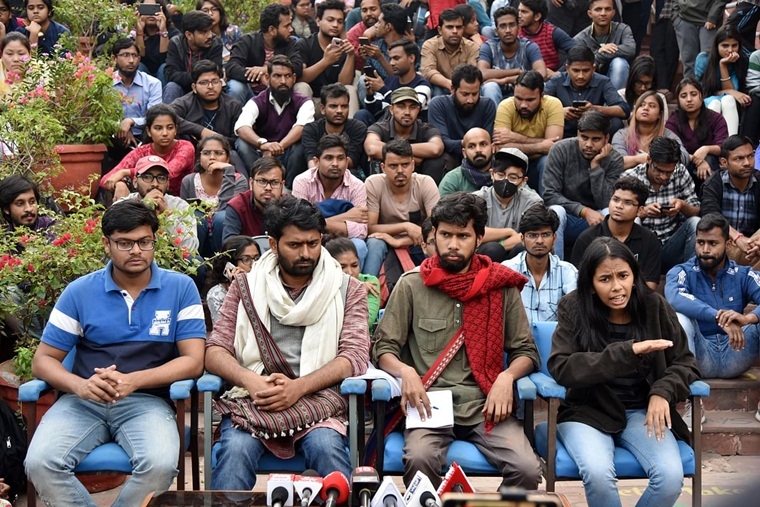 New Delhi: The Jawaharlal Nehru University Student Union (JNUSU), on Tuesday, said they were invited for a meeting with the Secretary, Ministry of Human Resource Development where they reiterated their demands and requested the ministry for speedy redressal of their concerns and resolving the deadlock.

"From our part, we clearly stated that the JNUSU wants a resolution in keeping with the spirit and concerns of the struggle that the students have been fighting for the last 58 days. We reiterated our position that the students remain committed to dialogue and discussions. We also requested the MHRD to expedite the process where our concerns are speedily addressed and the deadlock resolved. However, the present MHRD Secretary was shockingly and unfortunately not even updated about the entire crisis and hence could not give any concrete reply to the JNUSU," the student union said in a statement.

The movement against fee hike, the illegally passed hostel manual and to save public education, has been running for close to two months now. But, they said, the students are unfazed in their resolve. "We want a solution that is acceptable to the student community and the onus of restoring normalcy on campus lies with the administration. It is unfortunate that what has been conducted since December 18 in the name of examination is nothing but a smokescreen to depict to the outside world that everything is normal in JNU. It is not. It would be so much better if the administration had instead initiated a process for resolving the crisis by genuinely responding to the discussions held at the MHRD weeks back and provided a buffer period rather than go ahead with something that has no legitimacy," they added.

The movement has seen students stand up to circulars, notices, threats and police brutality, the JNUSU said.

"We hope that the administration and the MHRD will uphold the spirit of deliberations and dialogue as the best way to safeguard the interests of the student community and the cherished inclusive affordable character of our university," the JNUSU added.