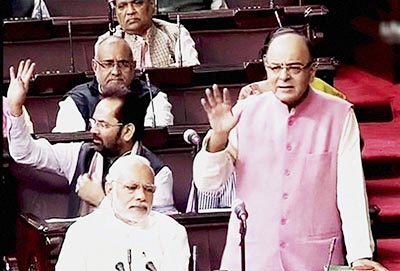 Says fundamental rights were snatched during the dark days of Emergency

New Delhi : Finance Minister Arun Jaitley on Friday took on the Congress, saying those who imposed Emergency rule in the country and “snatched” the fundamental rights of the people were now talking about constitutional principles.

“Fundamental rights were snatched during the Emergency. The government convinced the Supreme Court that during Emergency people lose the right to life and liberty provided under Article 21 (of the constitution),” the BJP leader said in the Rajya Sabha.

“After the Emergency, Article 21 was made non-suspendable, which means we are far more safe today. People who supported the Emergency are now talking about constitutionality. People lost the right to live during the Emergency,” he said, adding it was the “greatest challenge to democracy”.

He said: “A constitution and its provisions were used to subvert democracy during the Third Reich in Germany. You imposed Emergency, detained opposition leaders, censored newspapers, and brought into force a 25-point economic programme.”

Jaitley also took a dig at the Congress for not adhering to the constitutional provisions of Article 44 and 48 which deal with the formation of a uniform civil code and prohibition of cow slaughter, respectively. “Had Ambedkar proposed Article 44 and Article 48 today, I wonder how the House would have reacted.”

“Former prime ministers Jawaharlal Nehru and Indira Gandhi wrote to the states, asking them to make laws under Article 48 of the constitution, and all states except Kerala and West Bengal made laws,” said Jaitley.

New Delhi: Attacking the BJP for not acknowledging the contributions of leaders like Jawaharlal Nehru in the making of the Constitution, the Congress on Friday said this attitude reflected the ruling party’s intolerance which flows from the top to the streets.

“You can talk about the German Constitution, its dictator … but you feel ashamed to talk about (Jawaharlal) Nehru. … You are not able to recognise the contribution of the first Prime Minister …. This is called intolerance,” Leader of Opposition Ghulam Nabi Azad said.