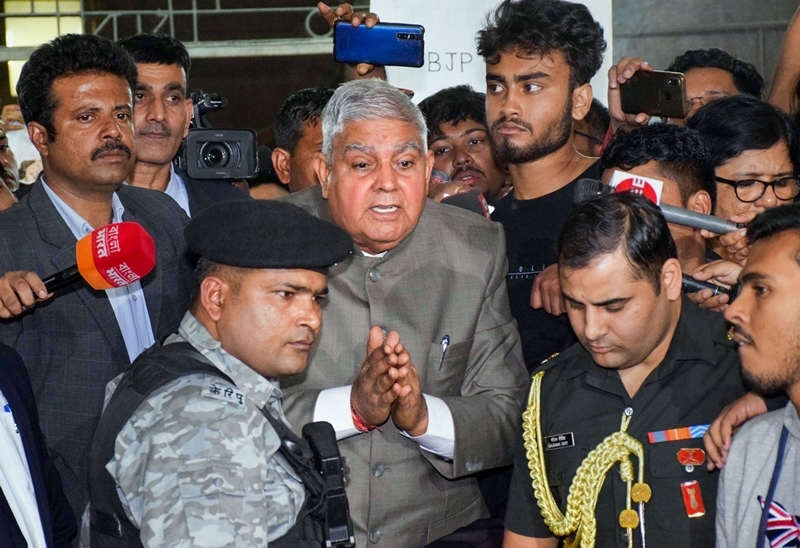 Kolkata: A large number of students and staff of Jadavpur University on Monday blocked the car of West Bengal Governor Jagdeep Dhankhar and staged a black flag demonstration, besides raising "Go back" slogans against him when he arrived at the campus to attend an official meeting.

Carrying posters branding Dhankhar as "Padmapal" (padma or lotus is the symbol of the BJP), the demonstrators alleged that he has failed to show impartiality as Governor and also berated him for supporting the controversial new citizenship law CAA. "Raj Bhavan has become Nagpur (headquarters of the Rashtriya Swayamsevak Sangh)," said a poster, as the demonstrators said they did not want Dhankhar as Ex-officio Chancellor and would boycott him.

Notwithstanding heavy security, including the CRPF personnel, who guard Dhankhar, the protesters surrounded the Governor's car when he was driven into the campus for presiding over the university court meeting and demanded that the Citizenship Amendment Act (CAA) be scrapped and there should be no National Register for Citizens (NCR) exercise in the country.

The leftist students and the Trinamool Congress-affiliated staff association, did not allow Dhankhar to alight from the car for around quarter of an hour.

After great difficulty, the security personnel led him into the administrative building but there his way was again blocked by the Sara Bangle sikhshabandhu Samiti -- a non-teaching staff association close to the Trinamool.

After waiting for some time, Dhankhar had to return from the building, unable to attend the court meeting. While he was leaving the campus, the students demanded Dhankhar answer their questions, and the Governor agreed.

The protestors asked for his opinion on CAA, which, according to them, "violated the constitution". The students told Dhankhar that 25 people have died during CAA protests and wanted to know why he has kept mum on the Akhil Bharatiya Vidyarthi Parishad (ABVP) activists vandalising the campus earlier this year.

Dhankhar encouraged the students to send a memorandum to him and said he was willing to engage with them.

"I am not representative of any government but of the constitution," he said, adding then well-being of students and autonomy of Universities were uppermost in his mind.

However, the students later said they were "not at all satisfied" with his replies. Dhankhar later said in a tweet that the "state administration was not at all responsive" with regard to his JU visit.

In another tweet, he spoke about his interaction with "agitated" students on various issues and expressed his keenness to connect with them further at Raj Bhawan.

The Governor claimed the JU court meeting could not be held and directed the university authorities to hold it at Raj Bhawan.

However, after the Governor left, the JU authorities held the court meeting, as under the new rules passed by the state government, the Governor's consent and presence was not required for conducting such meetings.

The court decided to hold a convocation on Tuesday for giving our academic degrees to the students. The university executive council had earlier scrapped the special convocation slated to have been held on the same day to give honorary degrees to four eminent persons.

Vice Chancellor Suranjan Das later said the Governor would preside over the convocation if he was present on Tuesday.