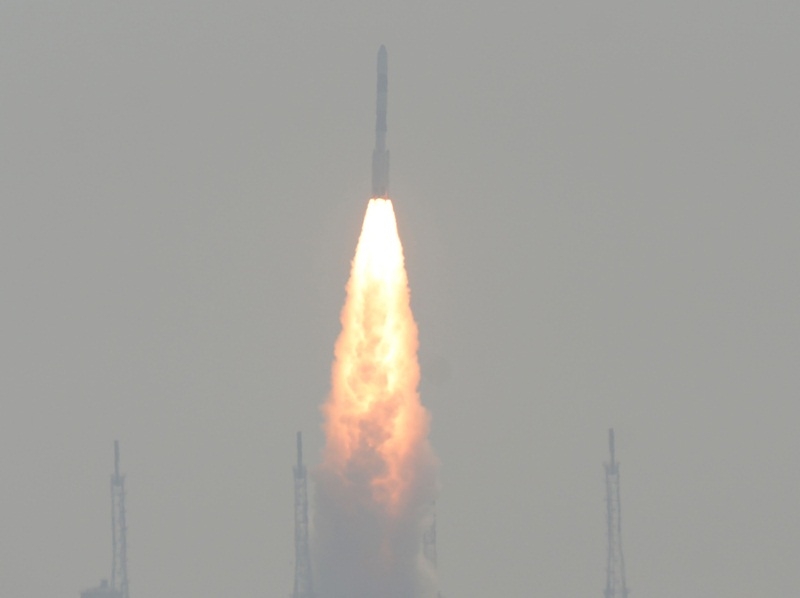 The Indian Space Research Organisation's (ISRO) Polar Satellite Launch Vehicle (PSLV-C45) launches India's Electromagnetic Spectrum Measurement satellite 'EMISAT' -- along with 28 satellites from other countries including Lithuania, Spain, Switzerland and the US -- at the Satish Dhawan Space Centre in Sriharikota, in Andhra Pradesh state, on April 1, 2019. (Photo by ARUN SANKAR / AFP) |

The low-Earth orbit satellite was launched from the Satish Dhawan Space Centre in Sriharikota at 9.30 am. This comes days after India test-fired an anti-satellite (ASAT) missile in the Mission Shakti operation.”The countdown for the launch on the PSLV, in its 47th flight, began at 6:27 am on Sunday. This will be the 71st launch vehicle mission for Sriharikota,” ISRO said.

The satellite that weighs 436 kg will monitor and provide locations for enemy radar sites deep in their territory. “PSLVC-45 launch is a very important milestone for the ISRO. It is not only going to launch our own satellite for signal monitoring but also 28 satellites from four other countries including the USA. The uniqueness of this mission is — it is going to place satellites in three different orbits, perhaps for the first time,” former ISRO chairman G Madhavan Nair told ANI.

The launch carries 28 international customer satellites from four countries — Lithuania, Spain, Switzerland and the USA. All these satellites are being launched under commercial arrangements.For the first time, the ISRO has invited common people to view the launch.