INL splits after factions come to blows in Kerala

While a prominent faction headed by INL state president AP Abdul Wahab expelled general secretary Kasim Irikkoor, a rival faction led by Irikkoor hit back at them by removing Wahab from state president's post and expelling seven secretariat members of his group
PTI 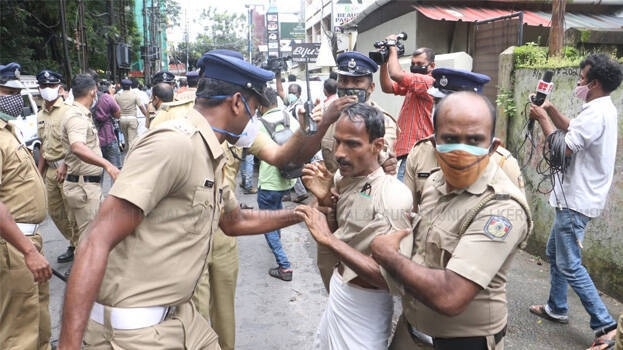 Kochi: The Indian National League (INL), a constituent of Kerala's ruling LDF, split into two irreconcilable factions following an infighting which led to a street fight between two warring groups here on Sunday.

While a prominent faction headed by INL state president AP Abdul Wahab expelled general secretary Kasim Irikkoor, a rival faction led by Irikkoor hit back at them by removing Wahab from state president's post and expelling seven secretariat members of his group.

The party's lone nominee in the Pinarayi Vijayan-led LDF government, Ahammad Devarkovil, is with Irikkoor.

Irikkoor claimed that his faction enjoys the full support of the INL national leadership.

Both factions had held parallel meetings of their supporters before announcing their decisions.

The Wahab faction alleged that Irikkoor was acting as an agent of the IUML and his intention was to create trouble for the LDF government to help the opposition in the state.

Irikkoor said INL had been with the LDF since its formation in 1994 and there will be no change in its position.

Earlier in the day, supporters of two warring factions came to blows in the presence of its leaders here.

A scuffle broke out in front of a hotel here after a section of INL leaders led by Wahab boycotted the party's working committee meeting alleging anti-democratic actions by Irikkoor.

In the previous meeting, Irikkoor had allegedly mentioned in the minutes that two senior leaders had been expelled from the party.

Provoked by it, the Wahab faction raised this issue in Sunday's meeting and it triggered a war of words between the two groups following which the faction led by Wahab walked out.

Police reached the spot in large numbers and used force to disperse the supporters of the groups fighting outside the hotel.

Amid the melee, Devarkovil, the Minister for Ports, was escorted out of the hotel where the working committee meeting was held allegedly violating COVID-19 protocols.

The Indian National League was formed in 1994 after a split in the Indian Union Muslim League.

The party, a member of the CPI(M)-led Left Democratic Front, was given a ministerial berth for the first time in the Pinarayi Vijayan-led government after the front's emphatic win in the Assembly polls held in April this year.