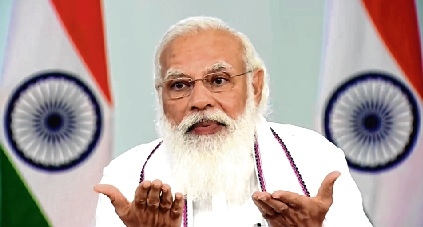 Adept at invoking the son-of-the-soil refrain, Prime Minister Narendra Modi on Tuesday went nostalgic during an interaction with Gujarat beneficiaries of Pradhan Mantri Garib Kalyan Anna Yojana as he said: “I will forever remain indebted to Rajkot for picking me as a first-time MLA.”

Interacting with a beneficiary from Rajkot, the hometown of Chief Minister Vijay Rupani, speaking in mother tongue Gujarati, Modi said, “I shall always remain indebted to Rajkot who made me an MLA for the first time (in February 2002).”

He virtually interacted with the PMGKA Yojana beneficiaries in Gujarat, while taking part in the ‘Annotsav’ festival as part of 9-day statewide celebrations for Chief Minister Vijay Rupani and his deputy Nitin Patel completing 5 years in office.

The PM interacted with the beneficiaries of free rations from five districts, including Rajkot, Gandhinagar and Dahod. Modi claimed the scheme had helped lakhs of poor people through free distribution of free rations during the pandemic.

Blaming all previous governments, the Prime Minister said, “Since Independence, almost every government had talked about providing cheap food to the poor. The scope and budget of cheap ration schemes increased year after year, but the effect it should have had remained limited. The country’s food reserves increased, but hunger and malnutrition did not decrease in that proportion.”

Earlier in the day, PM Modi lauded the efforts of Indian sportspersons taking part in the ongoing Tokyo Olympics and highlighted that this time, the highest number of players had qualified for the games.

Would PM be happy if I used dhokla instead of papri-chaat, asks O’Brien

NEW DELHI: After PM Modi’s disapproval of his ‘papri chaat’ comment on passing of bills, an unfazed TMC Rajya Sabha MP Derek O’Brien on Tuesday said his intention was to use a cultural idiom to connect with people over the serious issue and asked if the PM would be happier if he used the word ‘dhokla’ instead.

He stressed the real issue was the hurried passing of bills in both the Houses without any discussions and even added the prime minister’s reaction showed the “TMC is setting the agenda”. “Passing laws or making paapri chaat,” O’Brien said on Monday taking a swipe at the government and noting 12 bills were passed at an average time of under 7 minutes in Parliament.

On Tuesday, Union minister Pralhad Joshi said PM Modi was anguished over the comment and found it “insulting to the people who elect MPs”. “The TMC is setting the agenda and the PM is replying. Nowhere has the PM disputed the number we have put out of 7 minutes. It is a cultural idiom that people understand. Would PM be happier if I used ‘dhokla’ instead?” the Trinamool leader later told reporters.

“I speak in the language of the people. I have taken a serious fact and used a popular cultural idiom to spread the message,” O’Brien said.

The MP and his Lok Sabha colleague Kakoli Ghosh Dastidar served ‘chaat’ to mediapersons on Tuesday and even had their share of the savoury snack.