Prominent industrialist and former chairman of the Bajaj group Rahul Bajaj on Saturday passed away due to illness at his home in Pune.

Expressing grief over the demise of the veteran industrialist, President of India Ramnath Kovind said, ‘'Saddened to learn of Shri Rahul Bajaj’s demise. A doyen of Indian industry, he was passionate about its priorities. His career reflected the rise and innate strength of the nation’s corporate sector. His death leaves a void in the world of industry. My condolences to his family.’’

‘’Shri Rahul Bajaj Ji will be remembered for his noteworthy contributions to the world of commerce and industry. Beyond business, he was passionate about community service and was a great conversationalist. Pained by his demise. Condolences to his family and friends. Om Shanti,’’ Prime Minister Narendra Modi Tweeted.

Governor BS Koshyari said, ‘’Shri Bajaj was very vocal about expressing his views on issues concerning the business world in the country. The contribution of the Bajaj Group to the industrial development of Maharashtra is particularly high.’’

Biocon executive chairperson Kiran Mazumdar-Shaw said in a tweet, "I am devastated - he was a dear dear friend and will miss him dearly. The country has lost a great son & nation builder. Om Shanthi."

Uday Kotak, CEO of Kotak Mahindra Bank in a tweet said, "A rare businessman who spoke truth to power. A proud Indian. Built a world-class enterprise. I am truly honoured to know him. Will miss him."

Past President of Indian Merchants Chamber Ram Gandhi said, ‘’Extremely distressed to hear about Shri Rahul Bajaj passing away. There never was and never will be a businessman like him. A loss not only to the business community but to the nation. We shall all miss him dearly.’’

Rahul Bajaj took charge of the Bajaj Group in 1965. Under his leadership, the automaker firm saw its turnover growing to Rs 12,000 crore from just Rs 7.2 crore.

As per February 2021, Rahul Bajaj was ranked at 421 on the Forbes list of the world's billionaires with a net worth of USD 8.2 billion. 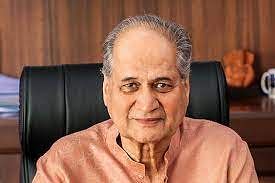