The defence minister also praised the spirit of Mumbaikars in the face of terror attacks in the past.
PTI 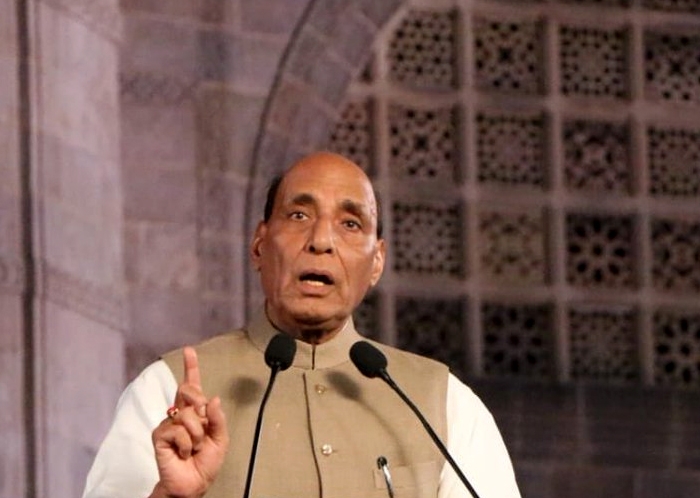 Defence Minister Rajnath Singh addresses during the Stories of Strength event organized to commemorate the 11th anniversary of the horrific 26/11 Mumbai terror attack, at Gateway of India in Mumbai on Tuesday. | Photo by ANI

Mumbai: Pakistan will get blacklisted by the Financial Action Task Force (FATF) if it did not stop sponsoring terrorism, Defence Minister Rajnath Singh warned on Tuesday.

Speaking here at a programme to mark 11th anniversary of the 26/11 Mumbai terror attacks, Singh also said that India is no longer "a soft target".

At least 166 people were killed when 10 Pakistani terrorists attacked Mumbai between November 26 and 29, 2008.

"Since last five and half years our government has destroyed all the terror infrastructure in India and now we are moving towards disrupting terror finance network with the help of Financial Action Task Force," Singh said.

"Because of FATF, Pakistan can see all the shades of gray," he said, referring to the international watchdog putting the neighbouring country in its `gray' list, and added "if Pakistan did not stop sponsoring terrorism, then it will most certainly be blacklisted."

Pakistan is struggling with a slow-down and inflation and "being blacklisted by the FATF will be the last nail in the coffin of terrorism", he said.

The defence minister also praised the spirit of Mumbaikars in the face of terror attacks in the past.

In the last 11 years, India has secured its borders and tightened the security, hence it is not easy for any terror group to launch another 26/11-like attack, he said.

In the last five years, there has been no terror incident in the country outside Kashmir, he pointed out.

Learning lessons from the 2008 attack, during which the terrorists came by the sea route, there has been a paradigm shift in the country's security architecture, Singh said, adding that a three-tier security system, consisting of the Navy, Coast Guard and Marine Police is now in place.

The Navy is setting up a special force, 'Sagar Prahari', consisting of 1,000 personnel, to guard naval assets and it will be a force multiplier if the situation warrants, Singh said. It's all about loving your family: Supriya Sule gives a warm hug to Ajit Pawar at Vidhan Bhavan