Cultural and business cooperation is vital, but the reality is that the shared security concern over China’s actions in the Indo-Pacific was the driver behind the overall growth in the bilateral relationship since 2019

The India-Australia Joint Working Group (JWG) on Defence Research and Materiel Cooperation will meet in Australia later this year, it was announced in the bilateral statement after Singh and Australian Deputy Prime Minister and Minister for Defence Richard Marles held a bilateral meeting in New Delhi.

Marles echoed Singh's statement, adding that the meeting was a step forward "in advancing defence ties."

Australia and India have come a long way since former PM Kevin Rudd was accused of abandoning the Quad in favour of Beijing in 2008. Both now face a markedly different regional environment dominated by China’s belligerent actions.

The new government has made it clear that India remains a priority partner for Australia.

The significant growth in the Australia–India relationship over the past five years is a foreign-policy success story. Australia and India have gone from having a limited relationship to brokering an interim trade deal, holding two bilateral leaders’ summits and becoming partners in the Quad and the Malabar naval exercise.

Defence and security cooperation were the key components of the comprehensive strategic partnership signed by India and Australia in June 2020.

It included a joint vision on maritime security, a defence science and technology research initiative and a significant defence logistics agreement.

Cultural and business cooperation is vital, but the reality is that the shared security concern over China’s actions in the Indo-Pacific was the driver behind the overall growth in the bilateral relationship since 2019.

It is what continues to sustain it, despite differences such as India’s approach to Russia. Tens of thousands of Indian troops continue to face off the Chinese army in the Himalayas while Beijing continues making inroads into the Pacific.

The ties between India and Australia have been on an upswing in the last few years.

In April, the two countries inked a trade pact to diversify bilateral trade.

In June 2020, India and Australia elevated their ties to a comprehensive strategic partnership and signed a landmark deal for reciprocal access to military bases for logistics support.

The Mutual Logistics Support Agreement (MLSA) allows the militaries of the two countries to use each other's bases for repair and replenishment of supplies, besides facilitating scaling up of overall defence cooperation.

The Australian Navy was part of the Malabar naval exercise hosted by India in November 2020 as well as last year. 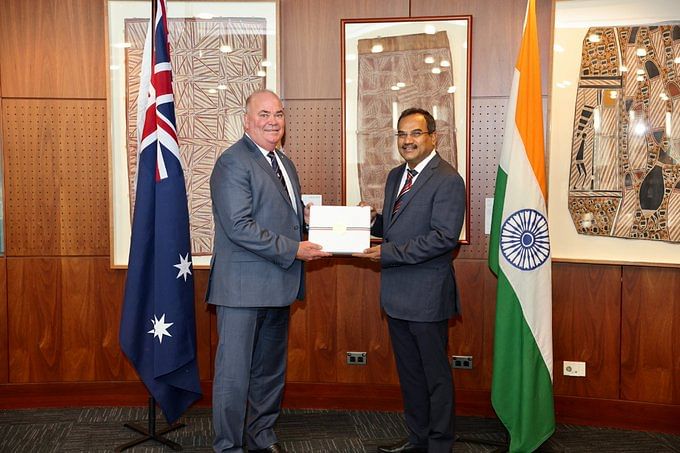