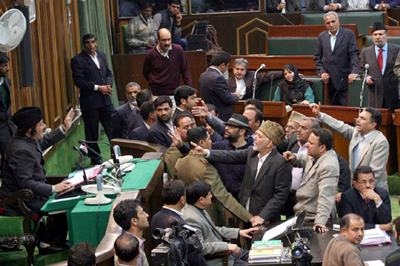 Srinagar: An independent legislator on Saturday continuously disrupted the first day of Jammu and Kashmir assembly’s autumn session as he accused the PDP-BJP government of carrying forward the agenda of the RSS. MLA Engineer Rashid asked Chief Minister Mufti Muhammad Sayeed, who was present in the house, to clarify his party’s stand on the beef ban issue. “To hurt the sentiments of Muslims of the state, you (ruling PDP-BJP coalition) are carrying forward the agenda of the RSS (Rashtriya Swayamsevak Sangh). It will not work,” he said.

“No interference in religious affairs,” read a banner that Rashid displayed in the assembly. “Please speak about those are alive and not about the dead,” Rashid said as Speaker Kavinder Gupta was making obituary references on former president A.P.J. Abdul Kalam and former ministers Ghulam Rasool Kar and Mir Ghulam Muhammad. Rashid even tried to storm to the speaker’s podium but marshals prevented him from doing so.

Later, he walked out of the house alleging that the speaker did not allow him to speak. The legislator has already submitted a bill seeking revocation of a 1862 law that bans slaughter, sale and possession of beef in the state. Chief Minister Sayeed and Leader of Opposition Omar Abdullah paid tributes to former president Kalam and others in the obituary reference. The house observed two-minute’s silence as a mark of respect. The house was later adjourned for the day.